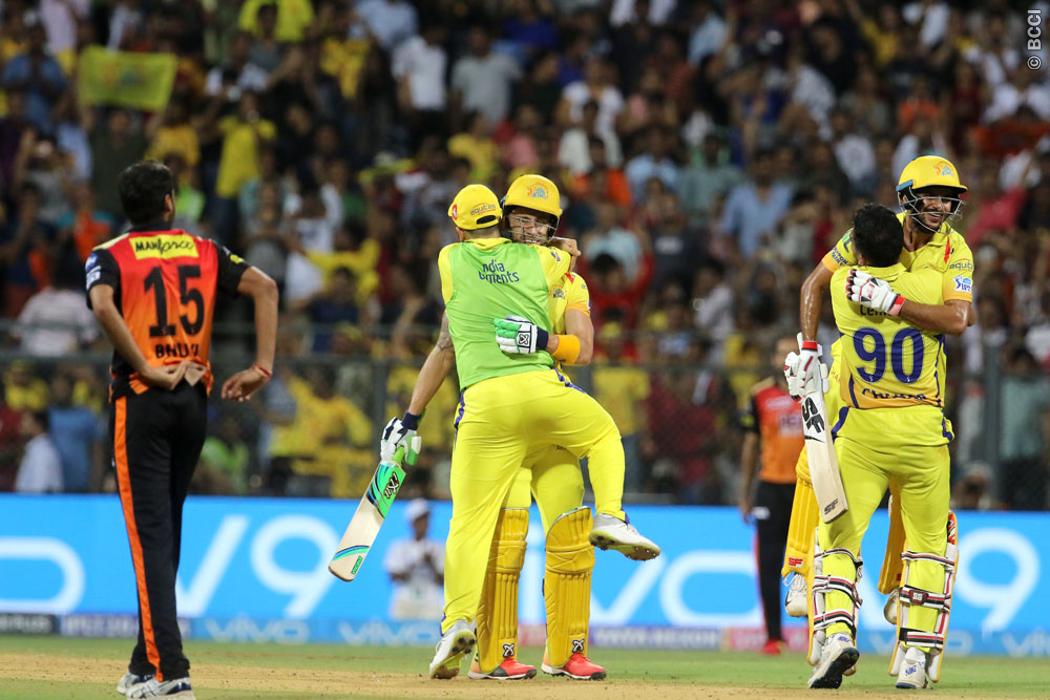 The CSK batting order had collapsed initially, as a spectacular SRH bowling attack; spearheaded by Afghanistan’s Rashid Khan; reduced them to 62 for the loss of six wickets and the two-time champions looked all set to concede the first final spot to the Hyderabad outfit.

However, opener Faf du Plessis dug deep in the innings, scoring a composed 42 ball-67 to help CSK chase down the 140 run target.

Winning the toss, CSK captain M. S. Dhoni elected to bowl first. The Super Kings’ bowlers got off to a great start, with opener Shikhar Dhawan getting clean bowled by Deepak Chahar on the very first delivery.

Getting reduced to 88-6 themselves, some hard-hitting towards the end of the innings by Carlos Brathwaite ensured the SRH bowlers had something to bowl at.

The CSK batsmen also struggled to get going, with the only meaningful contribution, apart from du Plessis, coming from Suresh Raina (22 from 13).
SRH bowlers picked up wickets in regular intervals, with Sandeep Sharma, Siddhart Kaul, Rashid Khan managing two wickets each, and Bhuvneshwar Kumar also picking up one to thwart partnerships from building up.

Despite the batting order tumbling at the other end, du Plessis played a shrewd inning, capitalizing on mistakes and with the help of a few wrong calls from SRH captain Kane Williamson, booked Chennai’s spot in the Final for a record seventh time in nine seasons.
Meanwhile, Kolkata Knight Riders will face Rajasthan Royals for the Eliminator match on Wednesday; the winner of which will then face SRH in Qualifier 2 to vie for the second spot in the Final, to be held on Sunday, where the winner will face off with CSK to decide the winner of the 11th edition of the IPL.