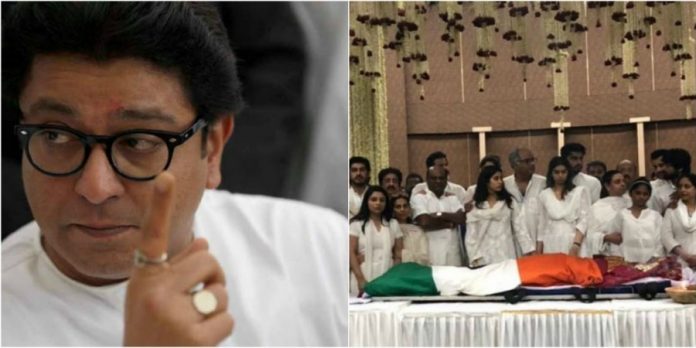 Maharashtra Navnirman Sena (MNS) chief Raj Thackeray asked a question on Sunday about why late Bollywood actress Sridevi was given a state funeral. “What did she do for the country that her body was wrapped in the tricolour?”, he asked.

Addressing the party workers at a rally in Mumbai, Raj Thackeray hit out at the Maharashtra government alleging that the media attention given to Sridevi’s demise was a means to divert attention from the multi-million PNB-Nirav Modi scam.

The party chief accused the BJP government for putting pressure on the media and pointed out that Nirav Modi was the talk of the town until Sridevi’s demise and funeral coverage took over.

“Nirav Modi was the talk of the town, then the issue of Sridevi came in. This was brought to change the issue. When a person like Sridevi dies, you wrap her in tri-colour and you say you did that because she was a Padma Shri. It was all fault of the Maharashtra government,” Raj Thackeray was quoted saying at the rally.

Also taking a dig at Akshay Kumar and his films ‘Toilet: Ek Prem Katha’ and ‘PadMan’, he said that the actor is “not even an Indian citizen” and was trying to follow in the footsteps of Manoj Kumar, an actor popularly known as “Bharat Kumar”. Taking a pot-shot at Akki’s socially-driven films he said, the films were just propaganda for government schemes.