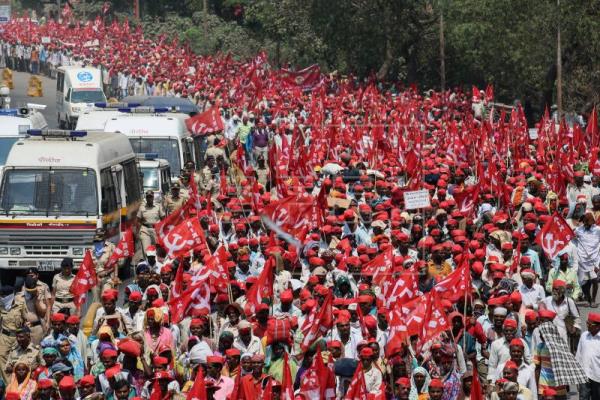 More than 50 thousand farmers thronged to streets of Mumbai to protest and demand waiver on their loans. Several political parties came in unison to support the farmer. After receiving a written reassurance from Chief Minister Devendra Fadnavis, the farmers called off their protests on Monday.

Only after three-hour long meeting, the government and protesting farmers were able to break the impasse. The government had finally agreed to farmers’ requests and sincerely look into their demands promising time-bound action into some of them.

Arrangements were also made by the government to send back protesting farmers. Central Railway will run two special trains from Mumbai’s CSMT to Bhusawal at 8.50 pm and 10.00 pm on Monday to send the agitating farmers back, ANI reported.

On Monday morning, Mumbai’s Azad Maidan turned into a sea of red as more than 50,000 people converged at the venue after embarking on a ‘Long March’ last Tuesday. The march was organised in order to protest against the alleged failures of the BJP government on the farm front, including non-implementation of recommendations of the Swaminathan Commission and the Forest Rights Act by the CPM-affiliated All India Kisan Sabha.

Senior communist party leaders such as Sitaram Yechury also came in to extend their support to the protesting farmers. Opposition Congress and Nationalist Congress Party surrounded the government over the alleged failure of its agrarian policies in the Assembly.

Farmers have been demanding an unconditional loan waiver scheme as opposed to the announced cap of Rs 1.5 lakh in the waiver announced in 2017. The government has said it will consider their request. However, the major breakthrough was the announcement of a special committee, headed by the chief secretary to look into the forest land rights. The government promised that the discrepancies will be resolved within six months.