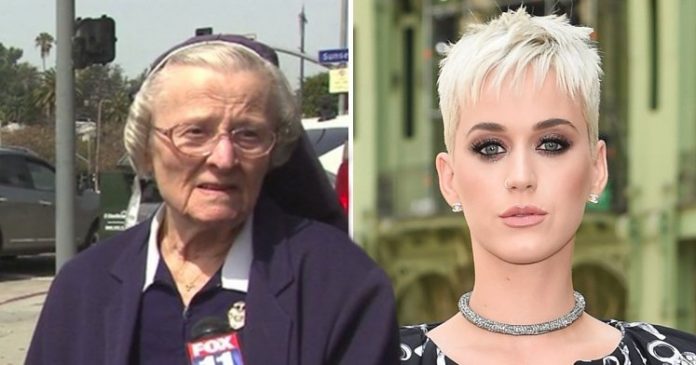 In what sounds like a storyline right out of a Hollywood film, a nun involved in a lawsuit filed against American singer-songwriter, Katy Perry, has died during a court appearance of the ongoing case.

The lawsuit was filed by the deceased, Sister Catherine Rose Holzman, along with another nun, on a sale of their 8-acre convent located in the Los Feliz area of Los Angeles.

The fight ensued after two people expressed interest in the property – the 33-year-old pop sensation and a restaurant owner, Dana Hollister.

After the deal got messed up, the Roman Catholic Archdiocese of Los Angeles and Perry sued Hollister, claiming Hollister’s interference in foiling the deal.

Following the complaint, a jury saw it Perry’s way last December, paying the Catholic district and Perry 10 million US dollars.

The 89-year-old nun was in court for a post-judgment hearing last week when she collapsed and died. Before that she had apparently said: “We asked (Hollister) to save us, to buy the property. She had nothing to do with forcing herself on us”.

Commenting on at Perry, she added, “And to Katy Perry, please stop. It’s not doing anyone any good except hurting a lot of people”.