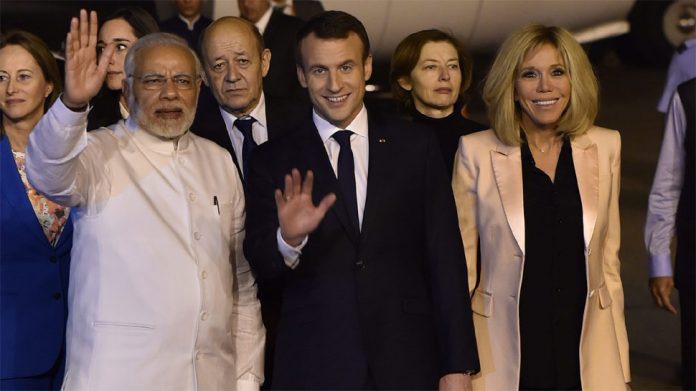 Prime Minister Narendra Modi receives French President Emmanuel Macron, as a special gesture, on Friday, who is on a four-day visit to India.

Macron is also accompanied by his wife Brigitte Marie-Claude Macron, along with senior ministers from his Cabinet. Supposedly, the visit would look to boost ties, especially in areas of maritime security and counter-terrorism.

Modi and Macron are expected to sign the agreement on the Jaitapur nuclear power plant, which is being built with French assistance, during the visit.

Furthermore, both leaders would be stepping up cooperation in the Indian Ocean region, which is included one of the agendas of top issues. And the delegation-level talks would begin tomorrow.

Apart from defence, cooperation in the areas of nuclear energy and space are the key aspects of the strategic partnership between India and France.

“In the area of space, India and France have a matured engagement and we would like to take it to a new level,” Naidu said.

It’s also worth pointing out that the Indo-French cooperation in the area of space is more than five-decades-old. Along with conventional areas, propulsion would also be on renewable energy, high-speed train and stepping cooperation in trade.

Following delegation-level talks with Modi tomorrow, Macron will be taking part in a Town Hall and have an interactive session, where more than 300 students from different levels and institutions are expected to participate.

On the very same day, the French President will also take part in a Knowledge Summit which will be attended by more than 200 academicians from both sides.

He will also attend the International Solar Alliance (ISA) Summit on March 11.

The ISA Summit, an initiative mooted by France and India, is expected to be attended by several heads of the states and governments. Possibly, the main focus could be on concrete projects. On the same day, he will also visit Taj Mahal in Agra.

He, along with Modi, will inaugurate a solar plant in Uttar Pradesh’s Mirzapur.