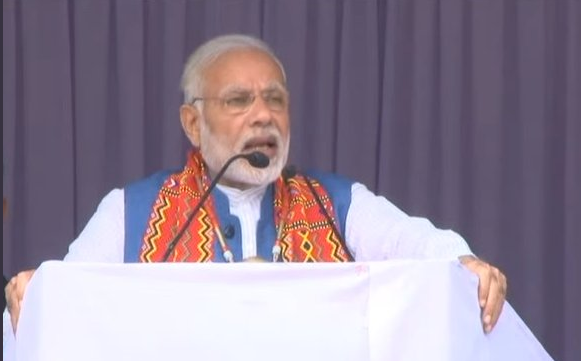 After the recently concluded assembly election in Tripura, Biplab Kumar Deb on Friday took oath as the Chief Minister of the state at a grand ceremony. Senior BJP leader Jishnu Debbarma would be assisting Deb as his deputy at the northeastern state.

The BJP taking over Tripura after a spectacular electoral victory is seen as a humiliating defeat for the unchallenged 25-year-old rule of the Left.

Prime Minister Narendra Modi, BJP president Amit Shah and other senior party leaders attended the Assam Rifles Ground in Agartala for the formation of a BJP-led government in the state.

After the ceremony, PM Modi addressed a gathering in Tripura where he thanked people for the historic mandate and said the government would strive to fulfil the aspirations of the people in the state.

Here are the top quotes from Modi:

I am here to assure the people of Tripura — this BJP government is for the people who voted for us and for those who did not vote for us. Elections are over and we have to look ahead. We will serve every citizen of Tripura,” PM Modi said.

“Ours is a new and fresh team. In age too, our team is younger. They have Anubhav, we have Umang and Utsah. We have to work together for the progress of Tripura,” PM Modi asserted.

Modi added that elections in early 2018 had renewed focus on the Northeast. He said that it was a positive sign and more and more people across India must know about the region.

“Good governance, Sabka Saath Sabka Vikas, people’s participation, we hold these principles in high regard. Ours is a government that will take every section of society together and work for Tripura,” he said.

Modi also sought support from the Opposition, urging them to use their experience in guiding the new government. “I hope Tripura will reach new heights.