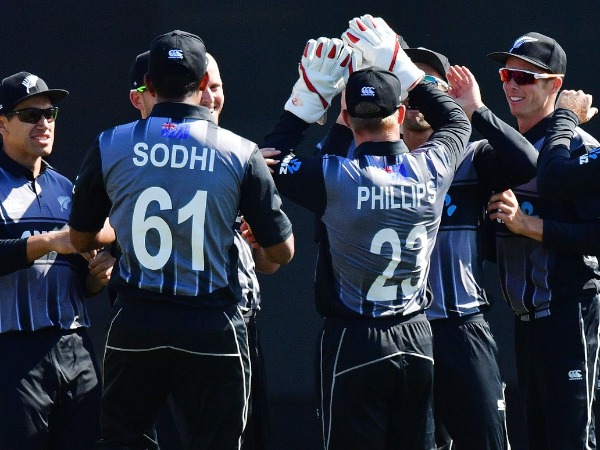 Continuing their dominance over Windies in the tour, New Zealand defeated the visitors in the first T20I by 47 runs to take a 1-0 lead in the three-match series.

After being invited to bat first, New Zealand were in for an early shock as Martin Guptill was dismissed cheaply. However, Jerome Taylor dismissing the batsman for 5 didn’t help Windies much. Colin Munro and Glenn Phillips scored half centuries each as the Kiwis added 86 runs for the second wicket in 10 overs. A little collapse triggered but Ross Taylor’s 20 from 13 and Mitchell Santner’s cameo of 23 from 11 balls helped the hosts post 187-7 in their quota of 20 overs.

It was especially a bonus last over from Kesrick Williams that changed the momentum of the game. He bowled 2 no-balls and conceded 25 runs in that over.

Chasing a target of 188 runs, Windies never looked in control. Seth Rance removed both the openers—Chris Gayle and Chadwik Walton—on consecutive balls in the 3rd over to reduce them to 19/2. Andre Fletcher tried to revive the innings but his knock of 27 runs was just not good enough. Couple of 20s from Carlos Brathwaite, Ashley Nurse and Jerome Taylor ensured that they atleast reduced the gap.

Rance and Tim Southee picked up three wickets each and Doug Bracewell picked up 2.

It was 6th consecutive defeat for the Windies, who are yet to win a game on the tour. The next game is scheduled to be played on first day of the 2018.