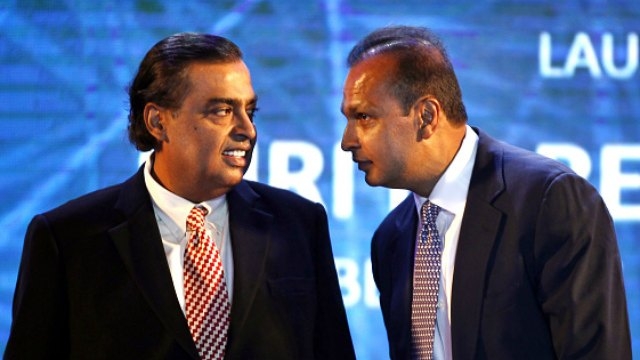 The 85th birth anniversary of Dhirubhai Ambani, the founder of Reliance, today turned out to be a happy ending to the sibling rivalry of more than a decade. Elder brother Mukesh Ambani’s Reliance Jio has agreed to buy assets of younger brother Anil Ambani’s troubled company Reliance Communication (RCOM). Jio will buy spectrum, towers and fiber and wireless infrastructure of his RCOM which will repay its debt from the proceeds.

After the two brothers went their own ways in 2006, the two companies are coming together for the first time.

In May this year, explaining its first-ever loss, RCom had said it was the crisis in the industry, hyper competition, free offers and disruptive pricing that impacted the players including itself. That disruption was triggered by no one else but Jio, the company of Mukesh. Mukesh’s company pushed Anil’s to the edge as the sibling rivalry reached a climax.

This deal could be the Ambani brothers’ first step towards consolidation of their father’s business which they split more than 10 years ago after a long-drawn tussle. The carefully timed deal— on the birth anniversary of their father—is an indication of what lies ahead.

However, today’s deal is not totally unexpected. There were enough indications in the past. Last year, it seemed the brothers would soon band. Anil had announced that his telecom company had “virtually” merged with Mukesh’s Reliance Jio.

But the elder brother was not so forthcoming. In an interview to ET in May this year, Mukesh had said he was “happy” that the two brothers had overcome all their past issues at the family level, but added that their businesses were separate. The elder brother had said Jio would work with all the players in the industry, including RCom, in a number of mutually beneficial areas.

The long family dispute saw personal fortunes of Anil shrink while his elder brother Mukesh did far better. In 2007, Anil Ambani had a net worth of $45 billion, according to the Forbes Rich List. His biggest asset was a 66% stake in telecom venture Reliance Communications. Elder brother Mukesh had a net worth of $49 billion. In the 2017 Forbes Rich List, Anil ‘s net worth had shrunk to just $3.15 billion while Mukesh’s was $38 billion. Their group companies too reflected this trend.