Home Football No stopping record breaking Man City, not even ‘the special one’ 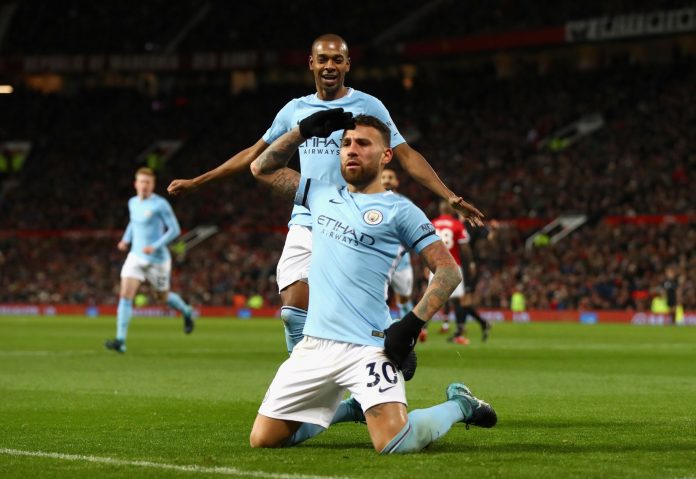 It seems like there is just no stopping the high flying Manchester City in Premier League. Manchester derby was supposed to put some break on the leaders but Pep Guardiola’s side registered an impressive 2-1 win at Old Trafford to not just end their rivals run of 446 days without a loss at home but also created a record of 14 successive wins in the Premier League for themselves. City were the last team to beat United before their run started.

The game started with some tactical changes from the last game for both the teams. Pep Guardiola benched Sergio Aguero and instead started with Gabriel Jesus.

City’s intent was clear from the very first whistle while United believed more on breaks. However once United settled, things started looking good for them.

In the 17th minute, Gabriel Jesus missed a clear chance. He hit it straight to keeper from top of the box. After few cautious play from both the end, in the 42nd minute, Sane had a chance for City. Ashley Young jumped to clear an aerial ball but his jump proved insufficient. Sane fired from an acute angle but De Gea saved it pushing for the corner. The resulting corner was converted brilliantly by David Silva in the 43rd minute to break the deadlock.

In the very next minute hosts had a corner but the sloppy effort from forwards saw Kevin De Bruyne build a counter-attack, only to miss-pass it. United then threatened in the counter— Martial making a good run before hitting a hard shot straight to the keeper.

The attacks kept changing side before Otamendi missed an aerial ball while Fabian Delph just about managed to get a deflection to Marcus Rashford, who equalised in the second minute of injury time, and the Red Devils were back in the game from nowhere. At the half time whistle both the teams were at the stage from where they had started.

Nine minutes in the second half, pressure from City finally paid off. A set-piece forced Romelu Lukaku to clear from the back line but his clearance hit Smalling and bounced. Otamendi then poked the bouncing ball to retain the lead for the Blues. It was Otamendi’s fourth goal of the season.

In the 65th minute David Silva made a great move and passed the ball on the top of the small box but Young read that before Sterling. Lingard then released a quick ball to Lukaku from midfield in 65th minute but heavily crowded area forced him to shoot from his weaker right foot and the ball sailed into the crowds.

City tested De Gea again as De Bruyne cut in from the right before firing a shot from the edge of the box but Gea got a hand. The very next minute United counter-attacked but to no avail.

In the 75th minute, Otamendi again made a meal of an interception and that took the ball to Rashford. It looked like we were in for another replay of the first United goal but he fired his shot straight to Goalkeeper Ederson.

A heated argument followed in 78th mint— while United felt they had won a penalty the referee pointed in the other direction and even booked Herera for allegedly diving— plenty of red and blue shirts surrounded the former before the game resumed.

Ederson made a series of great saves from a couple of powerful shots from Lukaku and Mata in the 84th minute and then he needed some fresh air. Everyone was wondering how on earth didn’t United had the equalliser! such was the intensity of the saves.

In the third minute of stoppage time, Silva had the opportunity to put the game to bed but Martial stole the ball. Seconds later he got another chance but he took a touch too many.

The win extended City’s lead at the top to 11 points.

There were two records up for the break today and one had to be broken. City was on a 13-game winning streak and was looking to become the first team to win 14 successive matches in Premier League in a single season, which they eventually did; while United was on an unbeaten home streak since 446 days, having last lost to the same rivals. The 2-1 result meant that even that got ruined.