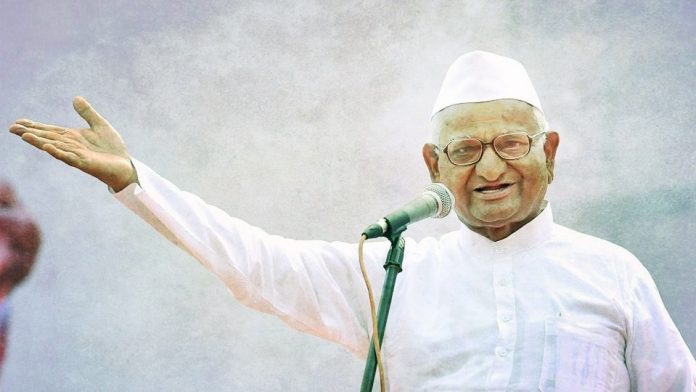 MUMBAI: Out of action and news from a long time, Social worker Anna Hazare will launch a protest agitation over Jan Lokpal and farmers’ issues in New Delhi on March 23 next year.

Anna, who has been the face of the initial Lokpal movement, that resulted in the formation of Aam Aadmi Party(of which he refused to be a part of)  said they have chosen March 23 to launch the agitation as it happens to be the ‘Shaheed Diwas’ (Martyr’s Day).

“This will be a satyagraha for Jan Lokpal, farmers’ issues and poll reforms,” Hazare said, addressing a meeting of his supporters at Ralegan Siddhi village in Maharashtra’s Ahmednagar district last evening.

The veteran Gandhian said he has been writing to Prime Minister Narendra Modi on these issues but hasn’t received a response yet.

“At least 12 lakh farmers have committed suicide in the last 22 years. I want to know the number of industrialists committing suicide during this period,” he said.

Anna Hazare has been demanding the formation of Jan Lokpal to keep a check on corruption. He went on a 12-day hunger strike in 2011 after which the then United Progressive Alliance (UPA) government was made to accept the demand in principle.

Hazare later launched a fast, which amassed great support from across the country. The UPA government later passed the Lokpal bill, but Hazare said that it was not powerful enough.

An aide of Hazare said the Modi government has not appointed a lokpal.

“The reason given from the government’s side is technical,” he said.

He said according to the Lokpal Act, a committee comprising the prime minister, the Lok Sabha speaker, the leader of opposition in the Lok Sabha and the chief justice of India or a Supreme Court judge nominated by him, should be formed and select the Lokpal.

“However, as there is no leader of opposition in Lok Sabha at present, the committee could not be formed and the lokpal could not be appointed,” the aide said.

The central government cited the same reason in an affidavit it filed in the Supreme Court when replying to a PIL , he added.