Twitter said that it has started testing 280-character tweets, doubling the previous character limit, in an effort to help users be more expressive. “Our research shows us that the character limit is a major cause of frustration for people tweeting in English,” the company said in a blog post. “When people don’t have to cram their thoughts into 140 characters and actually have some to spare, we see more people Tweeting — which is awesome!” 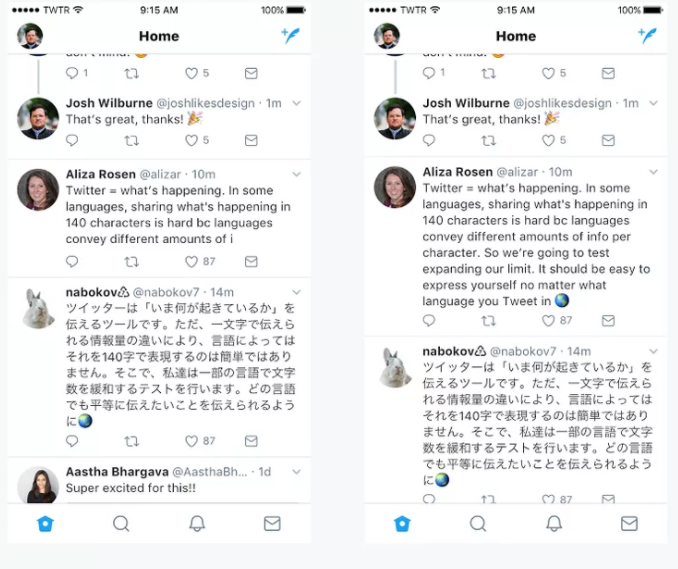 About 9% of all tweets today are exactly 140 characters, Twitter says. It’s tough to do that on accident, suggesting that users frequently have to edit their initial thoughts to get them under the limit. (It’s certainly true for me.) Now Twitter hopes to ease that burden by doubling the character limit in what it calls “languages impacted by cramming,” which includes every language except for Japanese, Chinese, and Korean.

The rationale for excluding those languages is that users can fit more thoughts into fewer characters given the nature of their written language. The average length of a tweet in Japanese is 15 characters, and only 0.4 percent of tweets hit the 140-character limit, Twitter says. Still, the company said it is open to revisiting the subject of expanded tweets for Asian languages as it learns more.

The 140-character limit was originally established to reflect the length of SMS messages, which was how tweets were distributed prior to the development of mobile apps. SMS messages are limited to 160 characters; Twitter reserved the remaining 20 for the username. As often happens in creative mediums, the constraint spurred creativity, and Twitter became a fast-moving, newsy, jokey, weirdo playground.