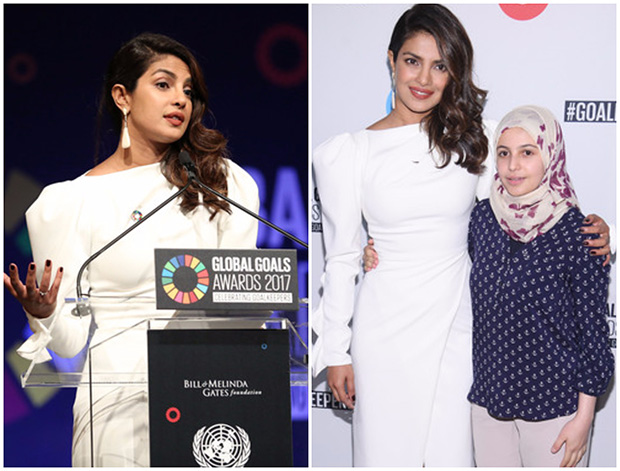 Actor Priyanka Chopra said that global leaders need to come together to create a better, brave and safe new world. The 35-year-old actor was speaking at the UN Global Goals Awards at the UN General Assembly. Priyanka took to Instagram where she posted a few pictures from the event and said that it was an honour for her to address leaders of global importance on empowering young girls.

In the words of Mahatma Gandhi… “If we are to teach real peace in this world, and if we are to carry on a real war against war, we shall have to begin with the children.” It was an honor to speak at the UN Global Goals Awards on the importance of empowering girls; addressing global leaders and influencers from the United Nations, philanthropy, media, non-profits and business. We all need to come together and work to empower, educate, create opportunities and impart skill sets so that we can be their catalysts for change and to help them build their brave new world. If possible, a safe one where they can live their dreams and laugh together as one.  I had the opportunity to meet @muzoonalmellehan, @unicef’s youngest goodwill ambassador, who is doing such amazing work advocating education for Syrian girls. All in all, this was a very inspiring and uplifting night. #GlobalGoals #UNGA #ForEveryChild

“We all need to come together and work to empower, educate, create opportunities and impart skill sets so that we can be their catalysts for change and to help them build their brave new world. If possible, a safe one where they can live their dreams and laugh together as one,” she wrote. The National Award-winning actor also said that she had the opportunity to meet Muzoon Almellehan, UNICEF’s youngest Goodwill Ambassador, who is working to advocate education for Syrian girls.

Priyanka, who is a UNICEF Global Goodwill Ambassador, also presented the Leadership Award to Ria Sharma from India, for her work for acid attack survivors through her organisation Make Love Not Scars (MLNS).

The Quantico actor wrote that such award ceremonies “highlight the role girls play in changing their lives and in making progress towards achieving the Sustainable Development Goals (SDGs)”.

She recently spoke about her upcoming film, Pahuna: The Little Visitors at the Toronto International Film Festival (2017). Not only did her comments about Sikkim harbour criticism on social media but also elicited a response from Sikkim’s Tourism Minister Ugen T Gyatso. Priyanka claimed, “Sikkim is a small state in the Northeast of India which never had a film industry of its own or anyone who made films from there and this is the first film ever that came out from this region because it is very troubled by the insurgency”.

ALSO READ: Rajkummar Rao appeals to Gurugram residents to vote for the upcoming…

In response to this comment, Tourism Minister Ugen T Gyatso said, “I condemn Priyanka’s statement. Being an international figure it’s a very disappointing comment on her behalf. It has definitely made us feel bad and sad but she has apologised us through a mail, likewise, her Mother Madhu Chopra also apologised over the phone today in presence of Sikkim media persons. Even Director Paakhi (Paakhi A. Tyrewala) had apologised earlier.

As everyone knows that Sikkim is a very peaceful State with peace-loving citizens so we accept their apology and we assure to provide security and help on our behalf to everyone who wants to shoot their films in Sikkim in future”. While her verbal statement at the film festival resulted in outrage across the nation, her apology email reflected yet another blunder.