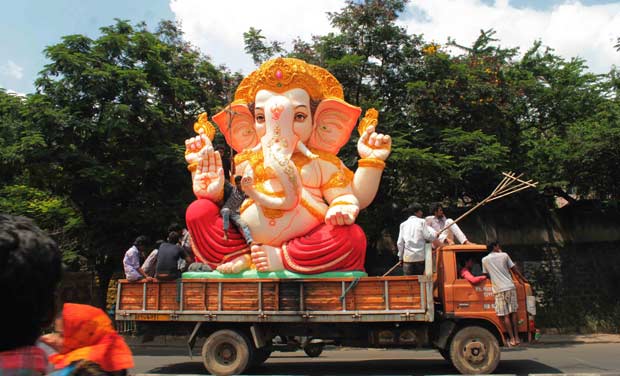 Ganesh Chaturthi, also known as Vinayaka Chaturthi or Vinayaka Chavithi, is a popular Hindu festival celebrated in honour of the elephant-headed God, Ganesha. It falls on the fourth day of the Hindu month Bhadrapada, usually in August or September.

The familiar chants and the surrounding festivities along with the food and fun are part and parcel of the Ganesha festival apart from the prayers and pujas. Ganesha is revered as the lord who removes obstacles and the one who brings about good luck.

As it is around the corner, here’s a list of a few places to head to, for those who want to soak in the happiness of festivities. 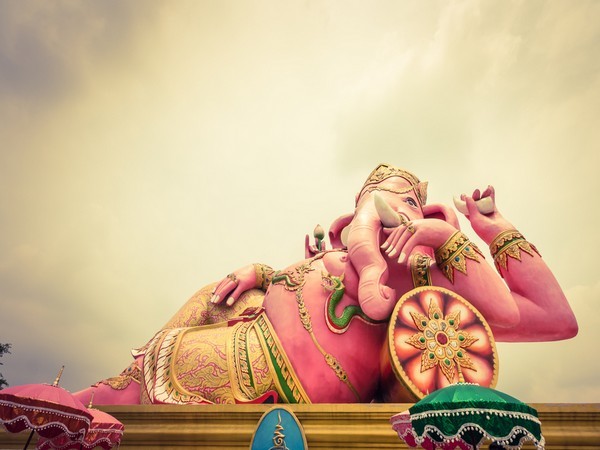 Ganesh Chaturthi is a 5-day celebration in the Swayambhu Ganapati Temple, where villagers and pilgrims join actively in a procession honouring Lord Ganesha. It is called ‘swayambhu’ as it is believed that the idol self-manifested from white sand. A taller idol of Lord Ganesha is placed in an ornate palanquin and is carried on the shoulders of the devotees through the village accompanied by a priest and a drummer.

#Major Highlight: The celebrations are incomplete without a pradakshina or circumambulation around the hill behind the temple shaped like Ganapati’s face. 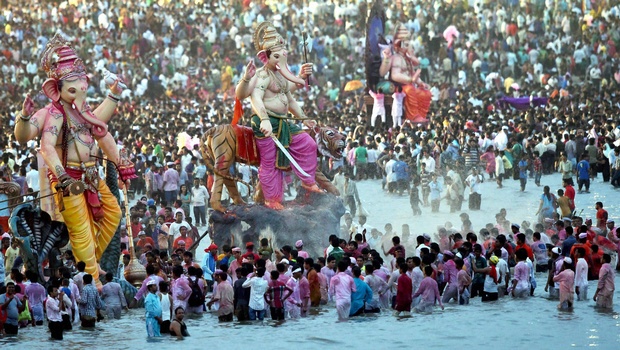 Mumbai is a spectacle during the days of Ganesh Chaturthi – it is alive with devotional songs, dances and drum beats. Visit Goud Saraswat Brahmin (GSB) Samiti Mandal at Wadala to enjoy a darshan of the richest Ganesha in Mumbai. Also, visit Lalbaugcha Raja which is not a shrine but a community organised festival. Huge crowds come to visit Lord Ganesha and at times it takes over 20 hours to reach the idol.

#Major Highlight: The festival ends with the ‘Ganesh Visarjan’ where the idols are immersed in the water. The most prominent of immersions occurs on Chowpatty Beach and festivities last till early in the morning. 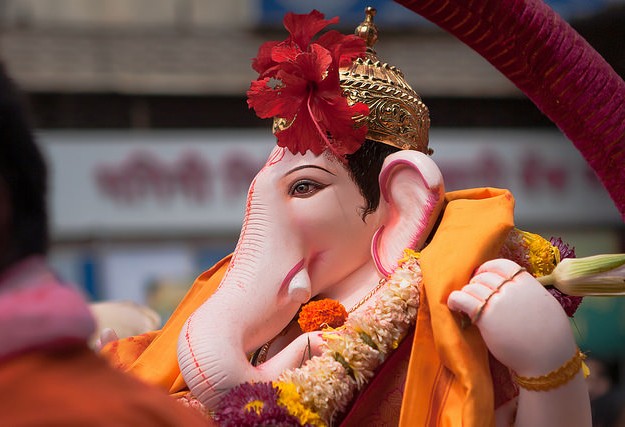 The festival is celebrated with much fervour for 10 days – it starts with the establishment of idols of Lord Ganesha on the first day to immersion of the Lord’s idols on the tenth day. Kasba Ganpati, Tambdi Jogeshwari Ganpati, Guruji Talim, Tulsi Baug Ganpati and the Kesariwada Ganpati are some of most unmissable Ganesh idols in the city.

#Major Highlight: Pune festival is also held during Ganesh Chaturthi and is mainly emphasized on the celebration of art and culture, song and dance, custom and tradition. 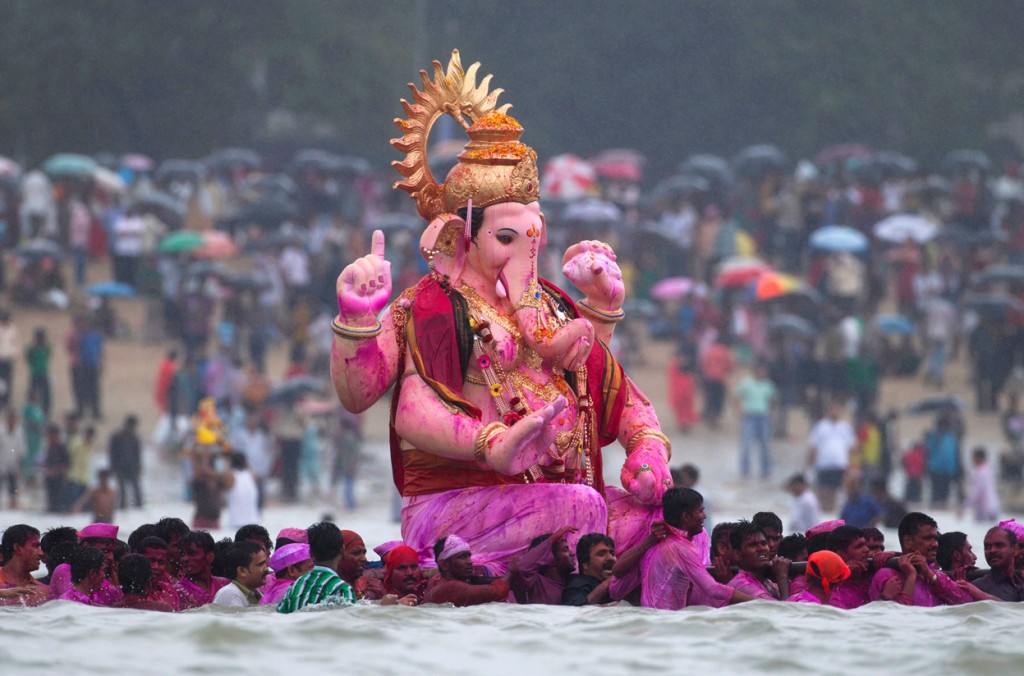 #Major Highlight: Bengaluru Ganesh Utsava upholds the rich tradition of India’s culture and heritage, through magnificent presentations of music, dance, drama and art by some of the finest artists of the country every year. 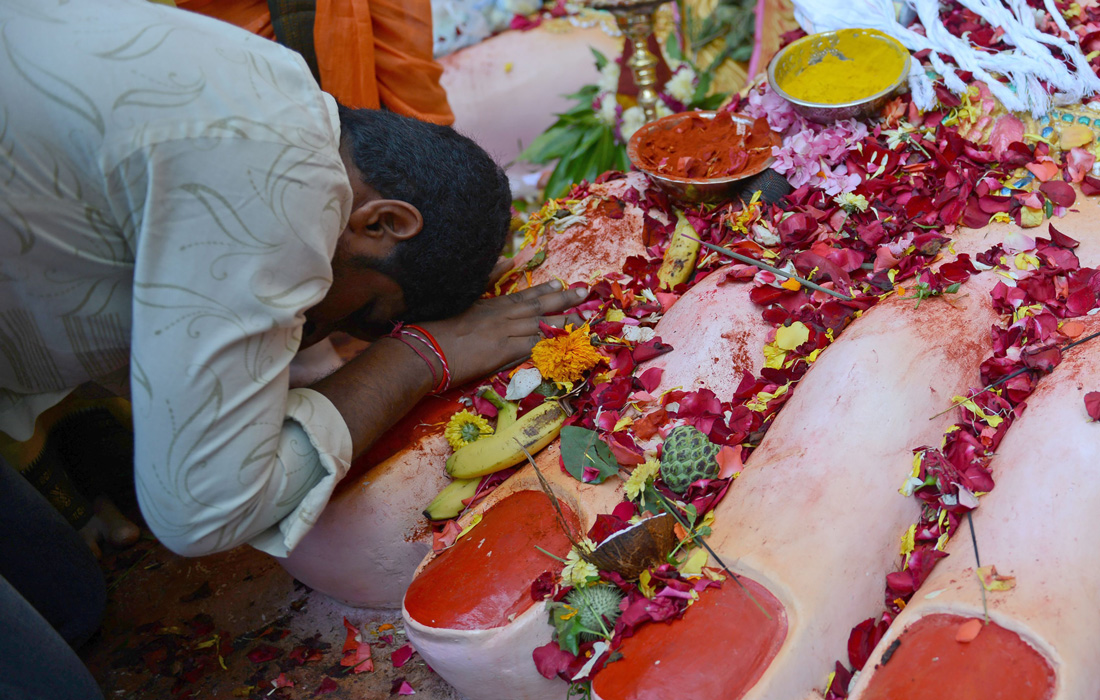 One of the most famous festivals in Hyderabad, Ganapathi Navaratri festivities starts on Vinayaka Chavithi (Ganesh Chaturthi) and ends on Ananta Chaturdashi day with idol immersion. The famous places where Ganesha idols are established and decorated fascinatingly are Khairatabad, Balapur, Kamalanagar Chaitanyapuri, Durgam Cheruvu, Old City (Gowlipura) and New Nagole.

#Major Highlight: Devotees immerse the idols of Lord Ganesh on the last day of the festival in the Hussain Sagar Lake in Hyderabad. Thousands of people join the procession and fill the whole atmosphere with Lord Ganesha chants. 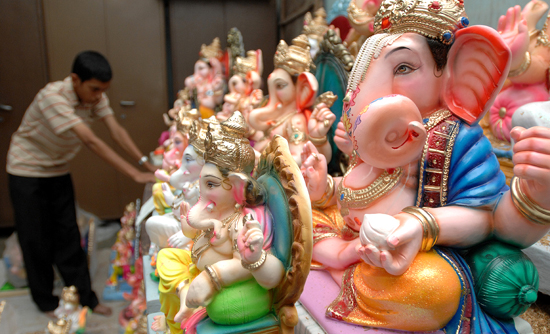 Known as ‘Chavath’ in Konkani, the popular Hindu festival holds a certain special significance in almost all religious cities and villages of Goa. Particularly in the village of Marcela, where this festival is celebrated the most as it is a village known for its wide number of Hindu temples. The artisans from the village are engaged in making many different idols of Lord Ganesh, with varied ideas springing in their creative minds. There are idols made of coconut, bamboo, cane etc., 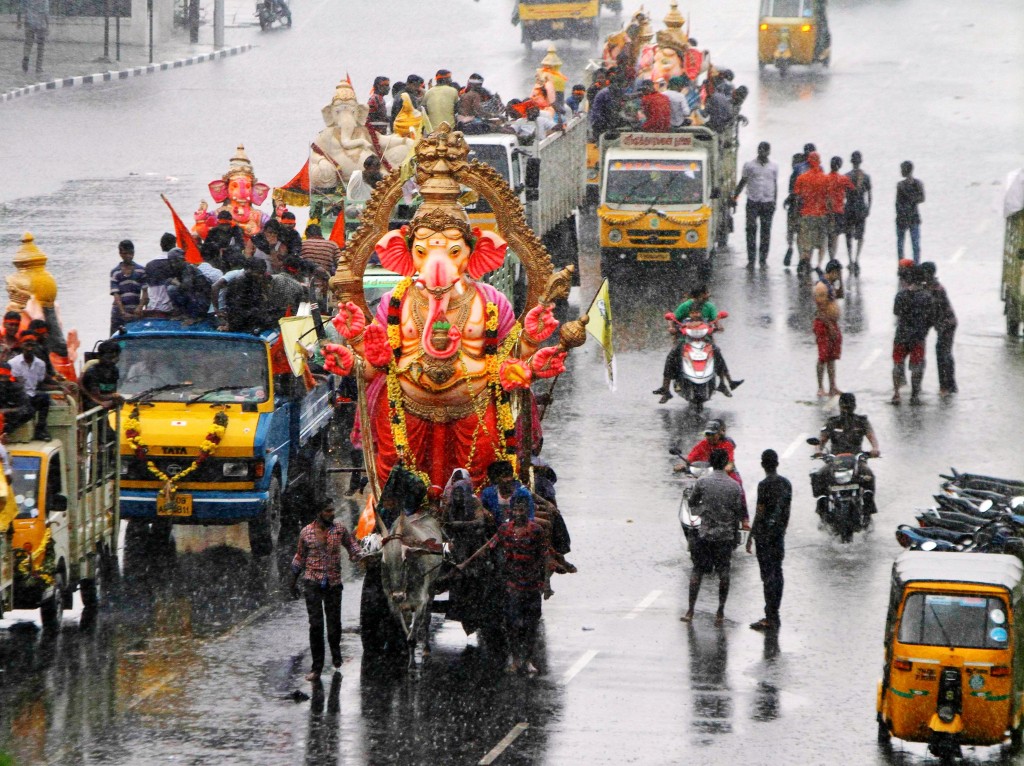 Celebrations in Chennai might not be on the same scale as Mumbai, but they are a treat to watch nevertheless. Across Chennai, locals set up Ganesh statues and the celebrations and at Marina Beach are a must-see.

Trivandrum is one of the few places that makes eco-friendly Ganesh idols using clay and milk. Follow the procession from the Ganapati Temple to Shanghumukham Beach and you’ll be in awe. Local artists and dancers with a variety of instruments dance throughout the way till the idol is immersed in the sea.

(Images from the Internet)