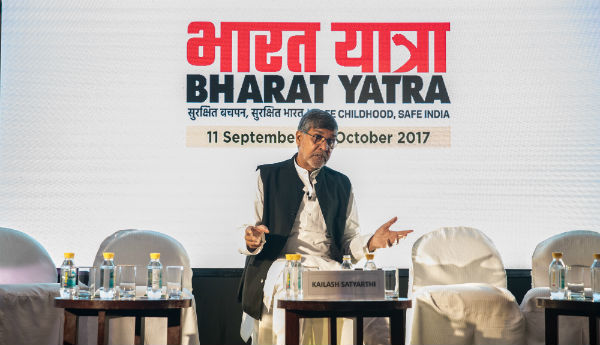 New Delhi: Nobel Peace Laureate Kailash Satyarthi is embarking on a historic ‘Bharat Yatra’ to spearhead the fight against child trafficking and child sexual abuse across the country.

Announcing the Bharat Yatra with the parents of the survivors, Satyarthi said, “I declare a war on child sexual abuse and trafficking. Today I am announcing Bharat Yatra, the biggest movement in history to make India safe again for children. I refuse to accept that the innocence, smiles and freedom of our children can keep getting stripped and raped. These are not ordinary crimes. This is a moral epidemic haunting our nation.”

“This yatra is the manifestation of my belief in ‘Surakshit Bachpan-Surakshit Bharat’. The yatra will pass through 22 states covering 15,000 Kms and union territories over 35 days.

The yatra will flag off from Kanyakumari on the 11th of September from the Vivekanand Memorial, commemorating the anniversary of the great leader’s address at Chicago in 1893. Guwahati will lead the yatra from the eastern part of the country, while Srinagar will flag off the northern stretch. The culmination of the Yatra will be in the national capital on 15th of October,” said Satyarthi.

Satyarthi won the Nobel Peace prize (2014) for his continuous campaign, efforts and struggle for the rights of children, across the globe for the past 36 years. He has led the historic Global March Against Child Labour in 1998 that prompted the International Labour Organisation (ILO) to pass international conventions against the worst form of child labour, in addition to the Shiksha Yatra in 2001, after which the Right to Education was included as a fundamental right in the Constitution of India.

Bharat Yatra is the launch of the three-year campaign against child rape and child sexual abuse which is aimed at increasing awareness and reporting of the cases, strengthening intuitional response including medical health and compensations, ensuring protection for victims and witnesses during trials and increasing convictions of child sexual abuse in a time bound manner. The campaign is expected to reach one crore stakeholders of the country.

The curtain raiser to this march in Delhi saw the launch of the video for the Bharat Yatra, which highlighted the appeal of children across the country to unite and fight for their freedom, safety and security.

The launch also saw families of victims of trafficking and abuse who narrated the emotional and physical trauma they had to endure because of the misdeeds of a few. The families pledged their support hoping that it would bring about the revolution; the country needs to sustain its fight against the exploitation of children.