Home Home Slider “I leave with a sense of fulfillment” says Pranab Mukherjee in his... 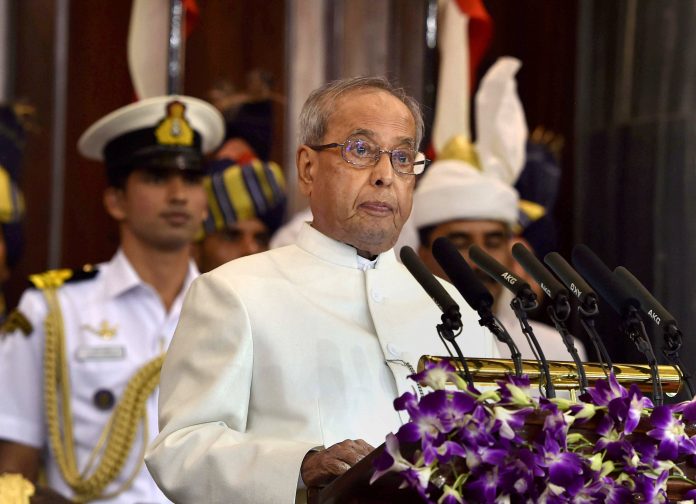 Overwhelmed with the ceremony, President Mukherjee thanked everybody present in the Hall, most particularly the Parliament for ‘creating’ him and spoke about his warm association with Prime Minister Narendra Modi, while also lauding him for various “transformational changes.”

“If I claim I am the creation of this Parliament, perhaps it will not be treated as immodesty. The Parliament gave a direction to my political vision as I got to learn a lot from the serious discussions held in both Houses of the Parliament,” he said, adding, he attended the first session of the Parliament on July 22, 1969.

“For the last 37 years, I have been a part of five Rajya Sabhas, four times from Bengal and once from Gujarat. It’s a tinge of sadness and a rainbow of memories that I will be leaving this magnificent building today.”

“As the President, I have tried to protect, preserve, and defend the Constitution, not just in letter but in spirit as well.”

“My career was mentored by Mrs. Indira Gandhi, who was a towering personality. She had the courage to call a spade a spade,” he said.

President Mukherjee expressed happiness over the fact that the Goods and Services Tax (GST) regime was launched during his tenure and disappointment over the constant downfall of the Parliament’s stature.

“The recent passage of the GST and its launch on July 1 is a shining example of cooperative federalism and speaks volumes of the maturity of India’s Parliament,” he said.

“It is unfortunate that the Parliamentary time devoted to legislations has been declining. The Parliament stands for debate and discussion. However, dissent and disruption have hurt the Opposition more,” he added.

President Mukherjee also said the government should avoid the ordinance route and it should be reserved only for compelling circumstances.

Concluding his address as he shouted “Jai Hind”, President Mukherjee thanked the gathering again for the farewell given to him, adding, “I leave with a sense of fulfilment and happiness of having served the country.”

“President Mukherjee brought a presidential focus and centrality to human development,” Mahajan said in her address.

Rajya Sabha Chairman and Vice-President Hamid Ansari, while addressing the Central Hall, spoke of the “long and distinguished” career of President Mukherjee, adding he has been an erudite scholar, along with being an excellent statesman.

The president, who is also Supreme Commander of the Armed Forces, was also given a farewell by the chiefs of the armed forces. The function was held at the Manekshaw Centre.

President Mukherjee will address a farewell speech to the nation at 7.30 p.m. on Monday (July 24).