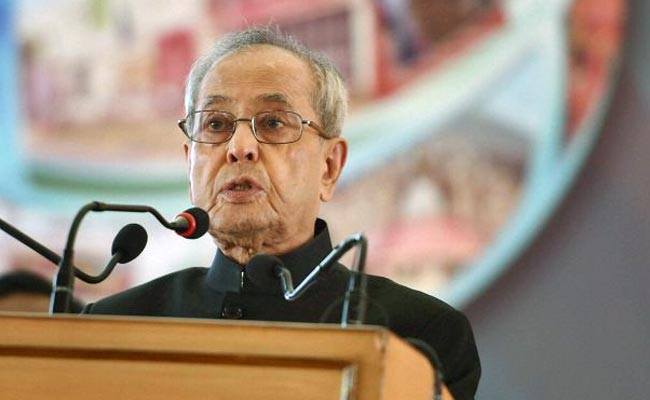 With the much-awaited Goods and Services Tax (GST) rolling out at midnight, President Pranab Mukherjee, while addressing a special session of the Parliament, said it is a tribute to the maturity and wisdom of India’s democracy.

Calling the introduction of the GST a “momentous” event for the nation, the President said this historic moment is the culmination of a 14-year-long journey which began in December 2002.

“The new era in taxation is the result of a broad consensus arrived at between the Center and the states. It is a tribute to the maturity and wisdom of India’s democracy. The GST will make exports more competitive and also provide a level playing field to domestic industry to compete with imports,” he added.

“I was closely involved in the design and implementation of the GST as the then Finance Minister. I had the privilege of giving assent to the Constitution Amendment Act,” he added.

He further compared GST with VAT (Value-Added Tax) and said there might be few difficulties in the intial stage.

“The GST is a disruptive change no doubt. It is similar to introduction of the VAT, when there was initial resistance. When change of magnitude is undertaken, however, positive it may be, there are bound to occur some teething troubles and difficulties in initial stage,” he said.

He said, under GST, the tax incidence will be transparent, enabling full removal of tax burden on exports.

“The GST will be administered through a modern world-class information technology (IT) system. The GST will create a strong incentive for buyers to deal with honest and compliant sellers who pay their dues promptly. Success of major changes always depends on their effective implementation,” he said.

Meanwhile, in a historic moment for the Indian economy, the much-awaited GST was rolled out in a special midnight session of the Parliament, in the presence of President, Pranab Mukherjee, Vice-President, Hamid Ansari, Prime Minister, Narendra Modi, Lok Sabha Speaker, Sumitra Mahajan and the Union Finance Minister, Arun Jaitley, among others.

The biggest tax reform since independence – GST – will pave the way for the realization of the goal of One Nation – One Tax – One Market.

Ahead of the launch, the Parliament was in all its glory on Friday evening with its main building decked out with rows of bright lights and people taking to streets to celebrate. It is only the fourth time in the history of Independent India that a midnight function is being organised in the Central Hall of Parliament.

The GST is expected to benefit all the stakeholders namely, industry, government and consumer as it will lower the cost of goods and services give a boost to the economy and make the products and services globally competitive, giving a major boost to ‘Make in India’ initiative.

Under the GST regime, exports will be zero-rated in entirety unlike the present system where refund of some of the taxes does not take place due to fragmented nature of indirect taxes between the Center and the States.

However, the GST will make India a common market with common tax rates and procedures and remove economic barriers. GST is largely technology driven and will reduce the human interface to a great extent. GST is expected to improve ease of doing business in India.

The GST Council has decided the final structure of GST as follows:

• The threshold limit for exemption from levy of GST is Rs 20 lakh for the States except for the Special Category, where it is Rs 10 Lakh.

• A four slab tax rate structure of 5 percent, 12 percent, 18 percent and 28 percent has been adopted for GST.

• A cess would be levied on certain goods such as luxury cars, aerated drinks, and pan masala and tobacco products, over and above the GST rate of 28 percent for payment of compensation to the states.

• The threshold for availing the Composition scheme is Rs 75 lakh, except for special category States where it is Rs 50 lakh and they are required to file quarterly returns only. Certain categories of manufacturers, service providers (except restaurants) are out of the Composition Scheme.

Other important Features of GST are:

· GST envisages all transactions and processes to be done only through electronic mode, to achieve non-intrusive administration. This will minimize tax payer’s physical interaction with the tax officials.

· GST provides for the facility of auto-populated monthly returns and annual return.

· It also facilitates the taxpayers by prescribing grant of refund within 60 days, and provisional release of 90 per cent refund to exporters within 7 days.

Further facilitation measures include, interest payment if refund is not sanctioned in time, and refund to be directly credited to bank accounts.

· Other provisions include system of GST Compliance Rating, etc.