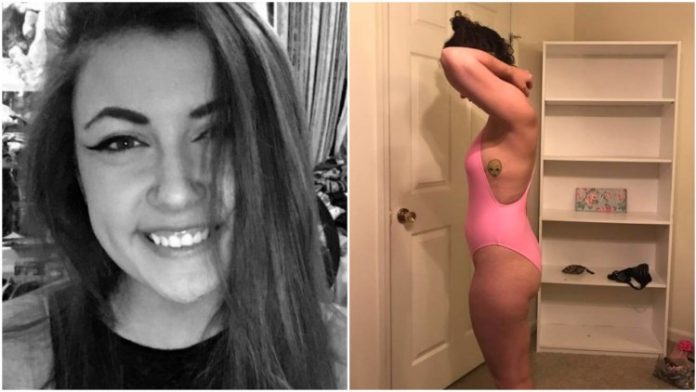 Tori Jenkins and her fiancé, Tyler Newman who live in Seymour, USA were taking a dip in the pool of their residential complex, when authorities asked Tori to leave the pool because of her attire and body type.

In a shameful incident in as told by Newman, Tori who was wearing a one-piece bathing suit, was accused of wearing a “thong bathing suit.” She was asked to either cover up or leave the pool because she might “excite teenage boys,” according to the reports. Not only was she humiliated but also forced to take pictures to understand the “inappropriate” nature of her swimsuit.

When Jenkins tried to go to the apartment office to reason with the complex’s leasing consultant, things only got worse.

Tyler wrote in a Facebook post about the incident, “In the office, the leasing consultant (who, for now, I will not name) insisted upon letting Tori take her picture to show ‘how inappropriate’ her bathing suit was, and instructed her to look into a mirror at her own body.” “When my fiancée replied with ‘I know what I look like, I bought this myself, it’s not a thong’ the consultant told Tori that if she didn’t have kids herself, she wouldn’t understand.”

Since he posted about the incident, the post has received over 30,000 shares. Jenkin also thanked everyone for their overwhelming support.

“The ENTIRE POINT of this post is that no man or woman has the right to make me feel uncomfortable in my own skin,” she wrote. “No right to police me or any other human.”

This is exploitation and should be condemned at every step of the way. Instead of holding women and their clothes accountable for sexual harassment, how about we hold the perpetrators responsible for their actions. We are endorsing a culture that teaches women that they’re responsible for a man’s impulses and lack of control. Instead of telling women they shouldn’t be allowed to wear a one piece bathing suit to a pool they paid for access to, perhaps teenage boys should be taught to respect women and not view them as objects.