Home IJourno In the backdrop of French Open 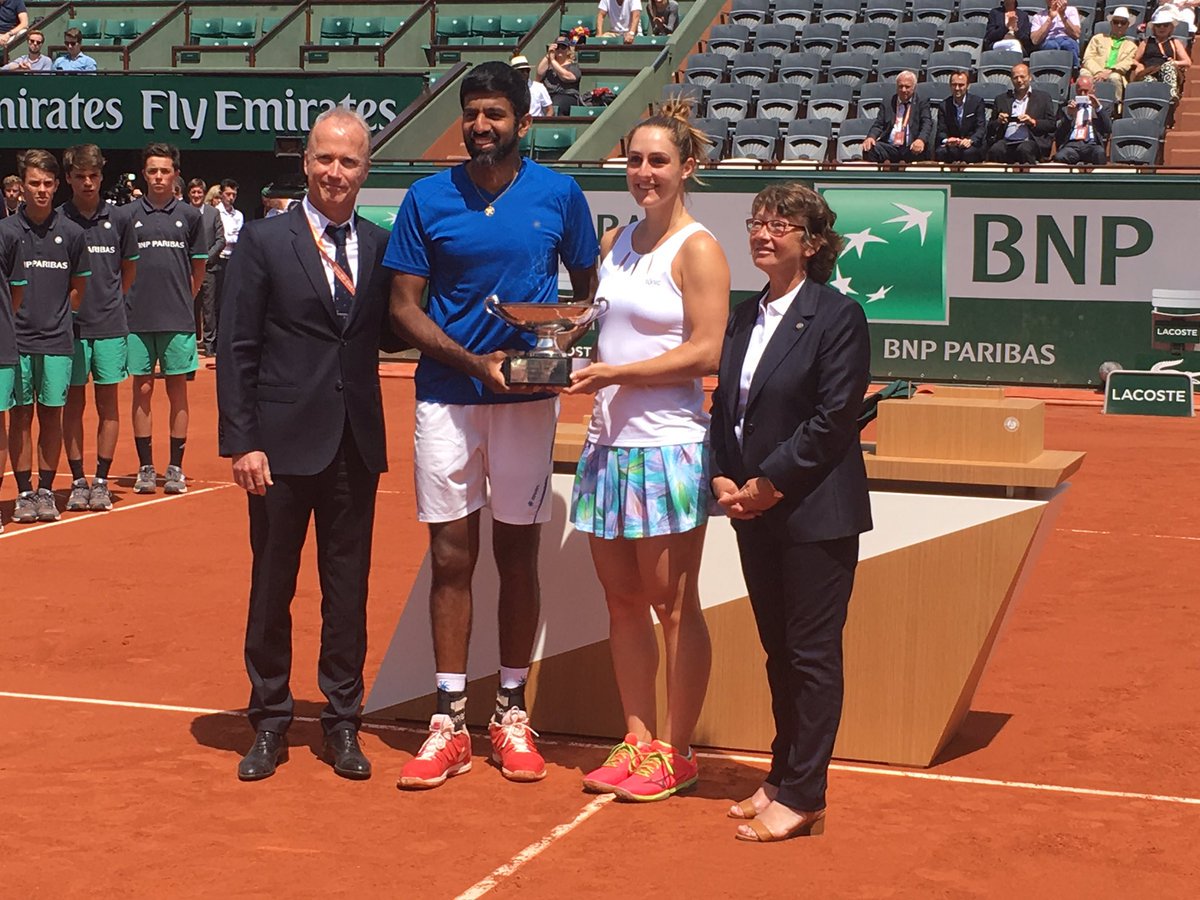 Amidst the buzz of ICC Champions Trophy, one piece of news went past bit unnoticed. Rohan Bopanna won mixed double title at French Open, which is his maiden Grand Slam title. With this Bopanna became fourth Indian after Mahesh Bhupathi, Leander Paes and Sania Mirza to lift a Grand Slam title (this discussion does not include titles at junior level).
Bopanna won this at the age of 37, which is quite astonishing as normally a tennis player is well past his prime by mid-thirties. But Indians have been excelling in doubles at such matured age. Bopanna’s senior Leander Paes won grand slam doubles at the age of 42 in 2015. Before this triumph at French Open, Bopanna’s best run in Grand Slam was in 2010 US Open, when he reached in to men’s double final but lost.
Incidentally it has been exactly after 20 years when an Indian won first Grand Slam title. In 1997, Mahesh Bhupathi won mixed doubles title at French Open only, pairing with Rika Hiraki. It somehow broke a shackle and after that Mahesh Bhupathi and Leander Paes had flurry of titles in years to come and later Sania Mirza joined the party. So before Bopanna’s triumph at Roland Garros few days back, Bhupathi, Paes and Sania have bagged more than 25 doubles Grand Slam titles (pairing with each other as well as with expat players).
But ironically as Indians have been exceling in doubles for the past two decades at Grand Slams, performance in Grand Slam singles used to be far better till the decade of eighties and literally there is nothing noteworthy done by Indians in singles for past 25-30 years (taking exception of Leander’s bronze medal at Atlanta Olympics in 1996). Paes & Bhupathi have won multiple Grand Slam double titles over the past two decades but it was Ramanathan Krishnan, Vijay Amritraj and Ramesh Krishnan who were way ahead in singles during their playing era.
Look at few of these facts :-
• In the decade of sixties Ramanathan Krishnan reached up to last four at Wimbledon Men’s singles twice. He also played in the quarter final at singles in French Open.
• There was a time when Vijay Amritraj was recognized as the most talented Tennis player along with legendary Bjorn Borg and Jimmy Connors. Amritraj did not live up to expectations but still he played in Grand Slam singles quarter final four times during his career.
• Ramesh Krishnan reached quarter final stage in Grand Slam Men’s singles three times during his career in eighties. In 1989, Ramesh Krishnan knocked out defending champion and then world no. 1 player Mats Wilander in Australian Open.
• Vijay Amritraj and Ramesh Krishnan had a peak ATP singles ranking of 16 and 23 during their career.
• In comparison, Paes never went past 3rd round and Bhupathi never went past 1st round in a Grand Slam singles. Their peak ATP singles ranking have been 73 and 217 respectively.
It is so much apparent that notwithstanding outstanding performance in doubles, Indians have slipped remarkably in singles over the past two decades.
Take the case of Davis Cup, wherein four singles and one double match is played. India ended as runners-up once each during the decade of sixties, seventies and eighties. But then there is hardly anything to cheer for during the last 25-30 years. It is primarily because of Indian’s inability in winning singles.
The most plausible reason for this is the way Tennis has evolved over the years. It has now become complete power game. Power and physical fitness has taken complete precedence over core paying skills. This is one area where Indians lags by huge margin from foreign players. One ought to have impeccable physical fitness to excel in singles at the top level. Anybody even iota short of being a perfect athlete may not succeed in single as you need to cover whole court with electrifying speed and that too in long rallies. Doubles on other hand is different game all together. Here your core playing skills and reflexes would have more weightage. That’s why Leander can win a double’s Grand Slam at 42.
This reason also manifests in the fact that while there have been Indians who were among the best at junior level but as they grew they slipped. Take example of Yuki Bhambri. Yuki won boy’s singles at Australian Open but currently stands at number 245 in ATP single’s ranking.
It is clear that at senior level, physical fitness would become very important. Though lack of world class facilities and coaching which is imperative to attain success at senior level is another reason.
With all due respect and acknowledgement for achievements by Indians in Grand Slam doubles, the true accomplishment would be if we can see our player doing well in singles.
To be honest, winning a singles at Grand Slam or even a top ranking ATP tournament is distinct reality and can’t even be dreamed of. But at least we can wish to see an Indian reaching in last eight of a Grand Slam. Even that won’t be easy and doesn’t look like happening in near future.