Microsoft Co-founder Paul Allen shared pictures of his new rocket carrier aircraft under his Stratolaunch System. The aircraft nicknamed the ‘Roc’ is a six engine motors ship with the longest ever wingspan. Weighing around 50,000 lbs, the plane has two split cockpits with a space to carry rockets and launch it into space. 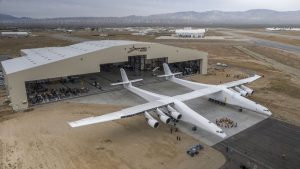 The plane is currently undergoing several tests before launch. The plane will initially a single Orbital ATK Pegasus XL but will have a capacity to launch three Pegasus in one go later on.