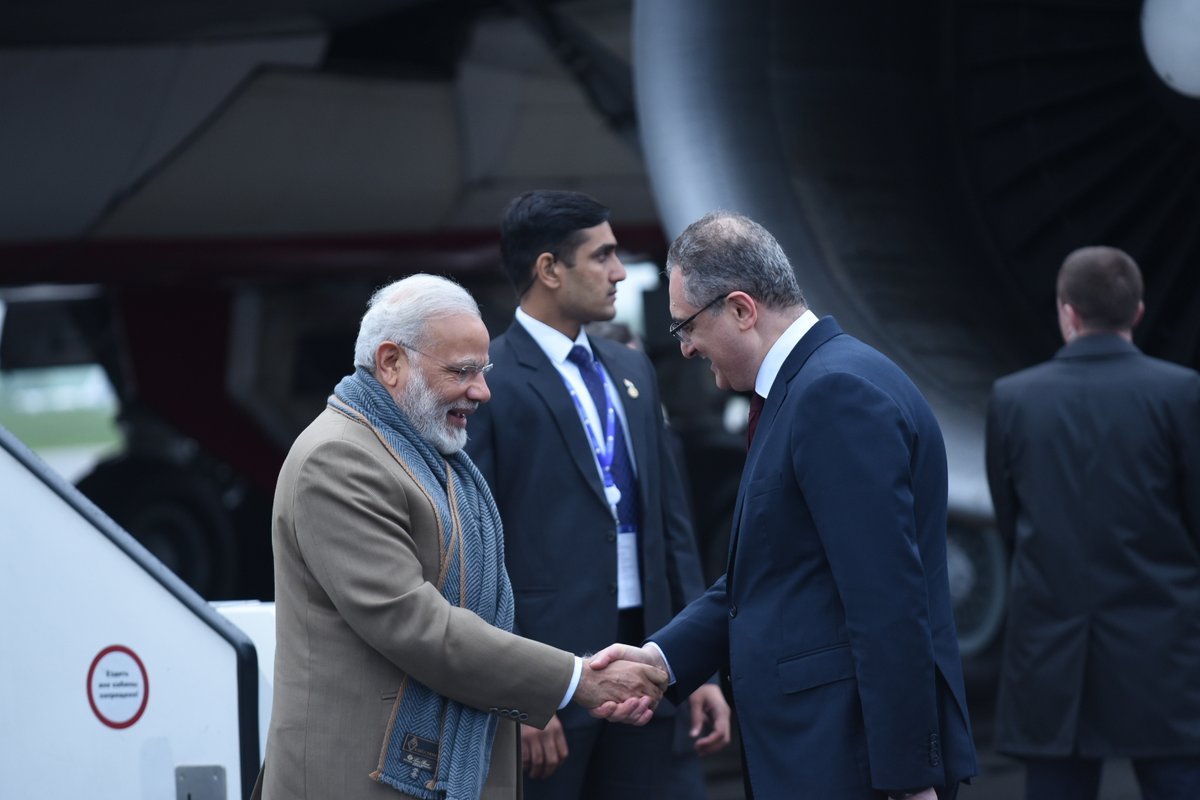 Moscow: Following his visit to Germany and Spain, Prime Minister Narendra Modi on Tuesday arrived in St. Petersburg, Russia as part of his four-nation Europe tour.

Prime Minister Modi will be having his bilateral meeting with Russian President Vladimir Putin where both the leaders will discuss ways to enhance ties in trade, defense and nuclear sector.

He will be visiting Piskarovskoye Cemetery in honor of those who lost their lives during the Siege of Leningrad (1941-1944).

He will also invite foreign firms to share technology with local players relating to defense equipment to be manufactured in India.

Prime Minister Modi is likely to raise India’s concerns over the China’s One Belt One Road initiative.

Prime Minister Modi and Indian delegation will be participating in the St. Petersburg International Economic Forum, which will be attended by thousands of business leaders from across the globe.

Ever since Russia is the only country with which India have annual summits.

Moscow and New Delhi are in talks over finalization of the general framework agreement for units 5 and 6 of the Kudankulam Nuclear Power plant in Tamil Nadu.

During his opening remarks after meeting Spanish President, Prime Minister Modi said that today’s talks will go a long way in furthering ties between the two countries.

The Prime Minister said that in an interconnected and interdependent world – Spain and India can work together both for mutual benefit and for the benefit of the world at large.

He described President Rajoy as a visionary leader.

Prime Minister Modi said India and Spain have both faced the scourge of terrorism and will both focus on fighting it.

The Prime Minister said both India and Spain are engaging in vigorous economic reform.

He said there is immense scope for cooperation in infrastructure, railways and smart cities.

The Prime Minister said that the vision of “New India” will be enhanced through the “New Momentum” in relations between India and Spain.

Seven agreements were exchanged between the two countries, covering subjects such as energy, security and civil aviation.

Prime Minister Modi later met with Spanish CEOs. He said during the meeting that there is immense potential for further growth of Spanish investments in India.

He mentioned, in particular, sectors such as infrastructure, renewable energy, food processing, auto, chemicals and textiles.

He also invited Spanish participation in the Smart Cities initiative.

He asserted that initiatives, like Make in India, Digital India and Start up India, have become global magnets for investment.