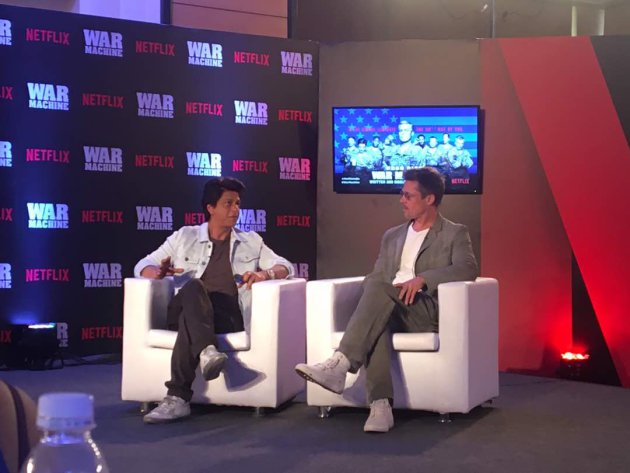 Mumbai: Brad Pitt’s trip to India to promote his latest Netflix satire, ‘War Machine’, came in as a big surprise for fans across India as it was a well-kept secret till the last minute but the Hollywood star was at his charming best as he joined superstar Shah Rukh Khan for an interesting discussion on their careers and the future of cinema.

Pitt, who had last visited Mumbai during the shooting of “A Mighty Heart”, starring his ex-wife Angelina Jolie, joked that he did not know how to dance or sing, an important element of Bollywood cinema.

“I wouldn’t make it in Bollywood, I can’t dance,” the actor told SRK.

Shah Rukh, however, quipped that despite being in Bollywood for 25 years, he was yet to master in the field of dance. SRK said he escaped complicated situations by just doing his signature ‘spreading the arms’ move.

“I just spread my arms and do nothing, that’s a step.”

Pitt, who was also joined by director David Michod, narrated his own experience of trying to play the piano and failing to do so. He said while he was good with one hand, another person’s hands had to be fitted in the film.

But the discussion soon turned to serious topics. When asked about the secret behind their long-lasting careers, Pitt, 53, credited his attempt to try and stay relevant.

“I try to reinvent (myself). I constantly look for something new and we (he and SRK) have been fortunate to survive our mistakes along the way. I think I just try to be relevant,” Pitt said during a chat.

Shah Rukh said he admired Pitt’s movies but a personal favourite was “12 Monkeys”.

“I find you amazing in that. You are fantastic. That’s when I became a fan of Brad as an actor. There are lots of them (movies)… ‘Benjamin Button’,” SRK said.

Pitt said he locked himself in a room just to see “how crazy you can get” while working on “12 Monkeys”.

The discussion then turned to Pitt’s cult hit “Fight Club”, which was directed by David Fincher.

“That was fun… anytime there is something irreverent and a great piece of writing… David Fincher directed it and Edward Norton… Now we just laugh.”

In “War Machine”, out on Netflix on May 26, Pitt plays a US General, Glenn McMahon, posted in Afghanistan.

Directed by Michod of “Animal Kingdom” fame, the film is inspired by the book “The Operators: The Wild & Terrifying Inside Story of America’s War in Afghanistan” by late journalist Michael Hastings.

ALSO READ: Sanjay Dutt back in his ‘Kaante’ avatar

An investment in the range of USD 60 million also makes it Netflix’s biggest-budget feature to date.

The actor said Hastings was frustrated that his story became more about the “sensational dismissal” of the General rather than being a discussion on the system.

Pitt said he wanted to carry on the footsteps of great war movies like “Dr Strangelove”, “MASH” and “Catch-22” which were an “absurd view on the absurdities of war”.

Writer-director Michod, who joined the two actors on the stage, said he changed the character’s name because he did not want it to appear like a biopic on McChrystal.

For Michod, it was also an interesting opportunity to put Pitt in a comedy role.

“It was a funny character for Brad to play. He is an incredibly gifted comedic actor.”

Pitt, who landed in India after the Tokyo premiere of the film, is putting his star power to use to promote the movie.

The Hollywood star said he decided to ditch the traditional studio and theatrical release model for this film because he felt sometimes good stories are lost in the rush for the opening weekend numbers.

A problem that they will not encounter with Netflix which has almost 100 million subscribers around the globe and has emerged as a major challenger to theatrical releases.

“The business model of the studio system in Hollywood does not allow films like that. Print and advertising is so expensive. From a viewers perspective, more films are getting made.

Shah Rukh echoed Pitt, saying youngsters are changing the way movies are watched and Hollywood films are doing well in India despite the strong foothold of homegrown industry.

“If we don t adapt ourselves in terms of marketing, visual effects, scriptwriting and professionalism, we will be overtaken. If we do not learn from Hollywood, there is a real fear of being overtaken.

“The language barrier is no longer there. Spider Man does as well as a Hindi film, so we have to adapt. Scripting especially. If we don’t do that, we’ll have an issue over the next 20 years.”

Shah Rukh, who has been a part of some of the biggest potboilers in the Hindi cinema, said Bollywood was not treating its stories well.

“We have such wonderful stories to tell but we aren’t telling them well enough. We treat our stories like fads.

Singing and dancing has to be a part of Bollywood movies, if only to keep Brad away from our movies. But we should learn from Hollywood,” said Shah Rukh.