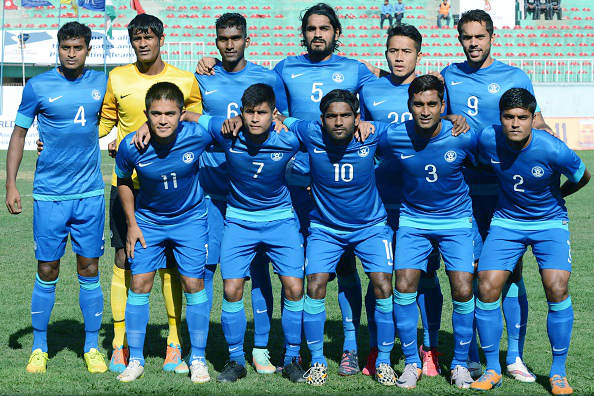 The Indian national football team climbed further heights to break into the top 100 of FIFA rankings. The latest FIFA rankings, which were released on Thursday, saw India perched at 100, one place above their April ranking of 101. The Blue tigers are placed at 100 alongside Nicaragua, Lithuania and Estonia.
India ranked 101st in the FIFA rankings for last month. This was a massive 72-place jump from being 173rd in March 2015. The last time India had been in the top 100 was in 1996, with the 94th spot in February 1996 being the country’s best ever FIFA ranking.

ALSO READ: Higuaín double puts Juventus in driving seat at Monaco
India had previously risen to 101 due to their away wins against Cambodia and Myanmar. They would have broken into the top-100 had it not been for 97th ranked Bolivia stunning Argentina. Under coach Stephen Constantine the Indian team has improved significantly.
It may be recalled here that there were reports of India going into top 100 earlier also but that depended on the result of Malawi and their failure to win both their African Nations Championship qualifiers against Madagascar. They failed to do so and subsequently dropped down.
Meanwhile, how long India remains in the top 100 is a matter of conjecture as they have no matches scheduled for this month. However, if they do then it will be a huge moment of joy – for the fans and players alike.