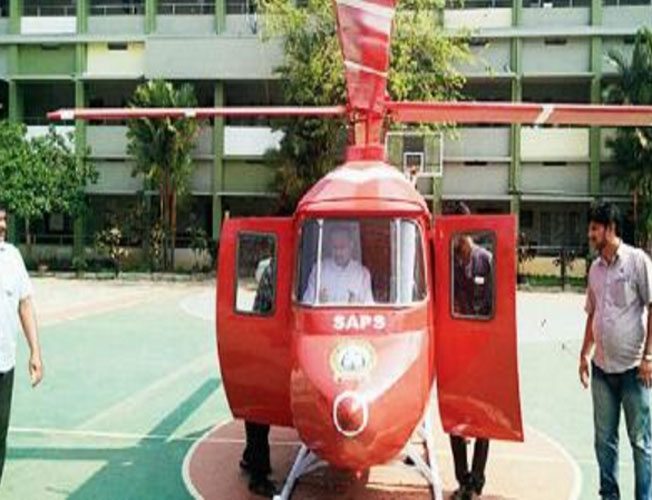 Some time ago, a man from Idukki was in the headlines after he designed and flew a twin-seater ultralight aircraft, all on his own from used parts and recycled material, and it also got him into the record books.

This time around, a man who has studied only till Class X and who has been running an engineering workshop, has manufactured a chopper on his own in his backyard.

On Tuesday, the chopper was displayed before the students of a private school in Kanjirappally and the first test flight is to be conducted within a month.

“I began to build the chopper after the school principal requested me to do so. In fact, he wanted me to build only a model of a helicopter to keep it the school. I thought why not make a fully-operational one,”

said Sadasivan whose daughter studies in the same school.

Sadasivan put to use the engine of an old Maruti 800 and a reduction gear box used for industrial purpose. “The rest of the parts were made at my workshop in Kanjirappally,” he said.

ALSO READ: Here’s how this MLA’s son ruined his luxurious ride in the most stupid way ever

“The chopper’s interior is made of iron and the exterior of aluminium,” he added. The glass of an autorickshaw was used as the windscreen of the chopper. He said he needs a month’s time before flying the machine.

“I need to get clearance from various agencies for permission to fly. However, before that I can fly the chopper within the limits of the property I own,” he said.

He is planning to conduct the initial flight in the school ground next month. It was a year-and-a-half back that Saji Thomas-person with a physical disability- flew a small aircraft which he made all on his own. It had taken five years for the 45-year-old to build his aircraft. Interestingly, his story has inspired the Malayalam film industry to make two feature films based on his life.