Home Sports India bowl out Australia for 300 on Day one 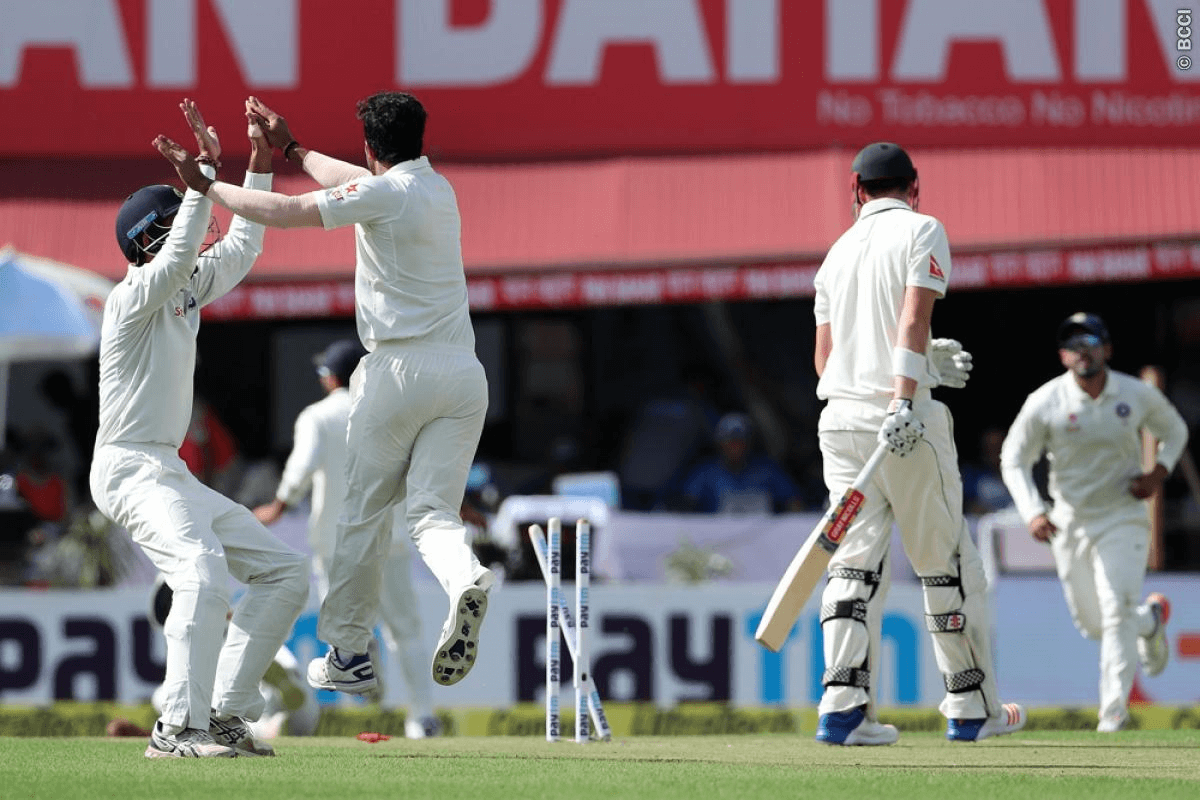 Dharamsala: Debutant chinaman bowler Kuldeep Yadav brought India back in the game with a mesmerising spell as Australia were reduced to 300 at the end of Day 1 despite another defiant hundred by Steve Smith on the first day of the fourth and final cricket Test.

India’s first ever left-arm wrist spinner bamboozled Australian batsmen in a terrific post-lunch spell where he accounted for David Warner (56), Peter Handscombe (8) and Glenn Maxwell (8) to put brakes on Australia, who were on a roll during the opening session, courtesy Smith (111).

Smith along with Warner had added 134 runs at a fair clip before Kuldeep weaved magic grabbing 3 for 41 in 14 overs.

Umesh Yadav (2/54 in 12 overs) once again played his part to perfection while Ravichandran Ashwin (1/36 in 14 overs) got the all-important wicket of Smith, who edged one to Ajinkya Rahane at slip at stroke of tea.

But the session was all about the 22-year-old Kanpur boy.

An inspired selection in place of an injured skipper Virat Kohli, it was the surprise element in his bowling that caught the Australian team on wrong foot.

All three batsmen dismissed during the post-lunch session were guilty of not reading Kuldeep from his hand, trying to play him off the pitch.

The extra bounce also helped his cause as Warner after doing all hardwork tried to play a cut shot close to his body only to find that the delivery bounced wee bit more to take a thickish edge to Rahane at first slip.

Kuldeep was in tears after getting his maiden Test wicket. After the over, Kohli was seen having a chat with the youngster at the boundary line.

Australia’s Ranchi Test saviour Handscombe shaped for a cover drive to a fullish delivery that turned in to breach his defence.

Maxwell was in a daze as he got the classical wrong’ un (googly for right-arm leg-break) as he tried to play for the turn only to find the bails dislodged.

Every wicket that the youngster got had coach Anil Kumble stand up and applaud.

For Australia, it was yet another gutsy effort from the skipper en route his 20th hundred in longest format during which he hit 14 boundaries off 173 balls. A nice tickle down the leg side got him to the three-figure mark, a feat that was acknowledged with standing ovation.

However, the tempo that he had set in the first phase was lost as he ran out of partners in the second session. He had to curb his strokeplay once Warner was out and then another senior Shaun Marsh got one into his rib cage from Umesh only to offer an easy leg-side catch to Wriddhiman Saha.