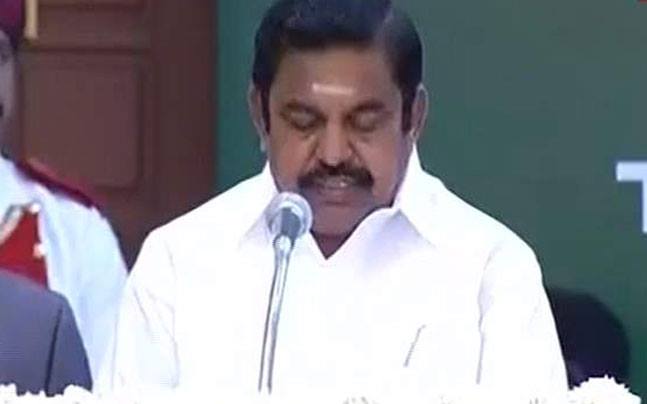 Amid former Tamil Nadu Chief Minister J Jayalalitha’s close aide VK Sasikala’s surrender in Bengaluru jail after she was convicted by the Supreme Court over disproportionate asset case, the fight for power finally comes to a close as state Sasikala’s loyalist E Palanisamy takes over as the Chief Minister of the state.

Soon after news of Palaniswami emerging as the next Chief Minister came in, supporters of Sasikala welcomed his elevation and hailed the Governor’s decision.

MLAs staying at the Koovathur resort, about 80 km from Chennai, for the past one week amidst police enquiries of their well-being, were all smiles and also raised slogans, hailing ‘Chinnamma’ (Sasikala).

Party MPs supporting Sasikala said due process has come into being and that the state government would stay.

Though the Governor held meetings with both the warring factions led by Panneerselvam and Palaniswami respectively during the last two days, he seems to have gone by the constitutional mandate on the support of MLAs’ to the Chief Minister designate, who claims to have the 124 legislators on his side.

Rao was on Moday advised by Attorney General Mukul Rohatgi to convene a special session of the Legislative Assembly within a week for holding a composite floor test.

12.00 pm: While we wait for Palanisamy to emerge out of his meeting with Governor Rao and address a press conference, here’s a quick poll you could take.

11.50 am: Reports suggest that the Governor could administer oath to Palanisamy today and then give him a few days to prove his majority in the Tamil Nadu Assembly. There’s no confirmation yet on whether it will be a three-day period or a couple of weeks.

11.40 am: Nominated MP and BJP member Subramanian Swamy claims he will stop focussing on Tamil Nadu politics once Palanisamy is invited to form government. In a tweet, he said: “As soon as this TN drama is over I  will forget TN and go back to Ram Temple and sending some more people to jail for corruption.” 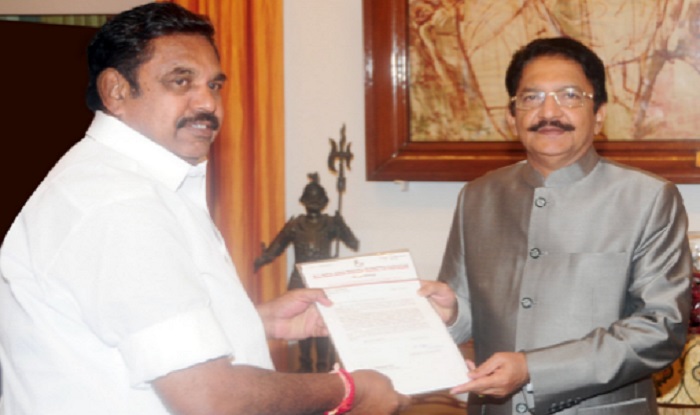 08:55 AM (IST)
Sasikala’s remote control: Kin once expelled by Jaya
The emerging power centre was visible when Dinakaran sat by Sasikala’s side when she met governor C Vidyasagar Rao on February 9 to stake claim to form the state government. He also accompanied Edappadi K Palaniswami when he visited the Raj Bhavan on Wednesday.

08:26 AM (IST)
Cats on wall Nataraj, Saidai broker peace
Former Chennai mayor Saidai S Duraisamy on Wednesday appealed to the warring factions in the AIADMK to sit and talk out their differences.

08:22 AM (IST)
Sasikala makes sure party remains in family hands
In what could be seen as an ambitious move to wield control of the party despite her conviction in the DA case, Sasikala re-inducted Dinakaran along with another nephew S Venkatesh into the party.

08:20 AM (IST)
Sasikala faction charts counterattack online
The AIADMK’s IT wing may have woken up late to the benefits and damage potential of social media. Now that they are on to it, they are blaming every party, DMK, PMK, BJP as well as the rival faction, for the memes on Sasikala that have gone viral.

08:17 AM (IST)
CM aspirant last week, Sasikala will now make candles in prison
Sasikala will have to sleep on a cement floor, and will have to petition the court if she requires a cot. She was issued three saris and blouses on entering prison.