Home Music & Entertainment The mystical journey of Bollywood over the years 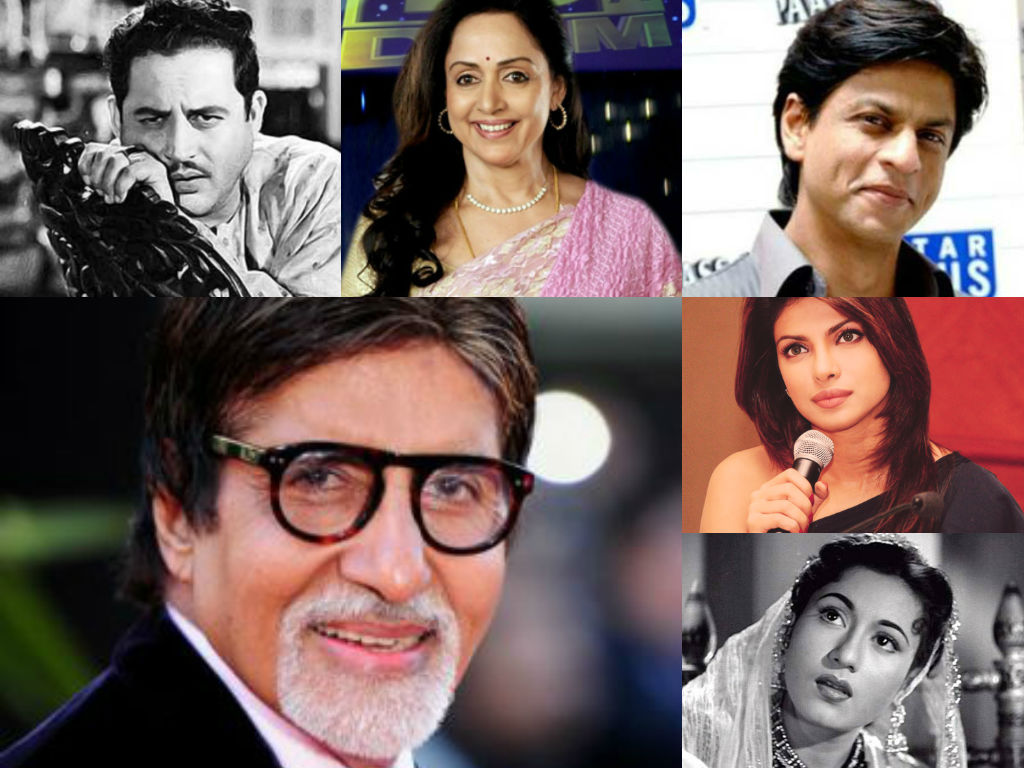 When Dadasaheb Phalke released his epochal feature film Raja Harishchandra in 1913, the exhibitors or the pioneer film makers never realised they were unleashing a mass entertainment medium that would hold millions in sway for the next hundred years.

The French might have introduced the concept of moving images, but little did anyone know that India would one day become the largest film industry in the world. Itâ€™s a miracle that Indian cinema has withstood the test of time despite the vast cultural differences in the past 100 years.

With the rise in technology in the 21stÂ Century, Indian films have undergone a sea change. We have moved from the black-and-white silent films to 3D, but our cinema continues to retain its basic essence, the thrill. Even as internet downloads and television continue to cannibalize the theatrical revenues of Indian films, the lure of the 35 mm is something else altogether.

On this 67thÂ Independence Day, let us have a look on the decades that made Bollywood proud.

Also Read: Twinkle Khanna is utterly confused; find out why

Following India independence, the period from the late 1940s to the 1960s is regarded by film historians as the â€œGolden Age  of Hindi cinema. While commercial Hindi cinema was thriving, the 1950s also saw the emergence of a new Parallel Cinema movement. Though the movement was mainly led by Bengali cinema, it also began gaining prominence in Hindi cinema. Early examples of Hindi films in this movement include Chetan Anandâ€™s Neecha Nagar (1946) and Bimal Royâ€™s Do Bigha Zamin (1953).

Some of the most critically acclaimed Hindi films of all time were produced during this period. Guru Dutt and Raj Kapoor ruled the era. Films of Guru Dutt, Pyaasa (1957) and Kaagaz Ke Phool (1959) and the Raj Kapoor films Awaara (1951) and Shree 420 (1955) became blockbusters. These films expressed social themes mainly dealing with working-class urban life in India. Some of the most famous epic films of Hindi cinema were also produced at the time, including Mehboob Khan s Mother India (1957) which was nominated for the Academy Award for Best Foreign Language Film and K Asifâ Mughal-e-Azam.

Among others, filmmakers like Satyajit Ray, Ritwik Ghatak, Bimal Roy, KV Reddy, L V Prasad and Ramu Kariat made waves in their respective film industries and they went on to make classics. Satyajit Rayâ€™s The Apu Trilogy, also had an important influence on cinematography across the world. One of his most important techniques was bounce lighting, to recreate the effect of daylight on sets. He pioneered the technique while filming Aparajito in 1956 and the second part of The Apu Trilogy. Some of the experimental techniques which Satyajit Ray pioneered include photo-negative flashbacks and X-ray digressions while filming Pratidwandi in 1972.

Changing social norms and changing economies influenced movies in the 70s. The narrative style changed. The story structure changed. Characters as well as content changed. Masala films were the demand of the time. The genre promised instant attraction and had great entertainment value.

The 1970s saw the rise of commercial cinema in form of enduring films such as Anand(1971), Amar Prem(1971) and Kati Patang (1972), establishing Rajesh Khanna as the first Superstar of Indian Cinema. Later, in mid 70s, romantic confections made way for gritty, violent films about gangsters and bandits. Amitabh Bachchan, the star known for his â€œangry young manâ€ roles, rode the crest of this trend. Action films like Zanjeer (1974) and Sholay (1975) solidified Amitabh Bachchanâ€™s position as a lead actor. Another important film from 1975 was Deewar, directed by Yash Chopra and written by Salim-Javed. A crime film pitting â€œa policeman against his brother, a gang leader based on real-life smuggler Haji Mastanâ€, portrayed by Amitabh Bachchan, it was described as being â€œabsolutely key to Indian cinemaâ€ by Danny Boyle

While Dev Anand, Rajesh Khanna, Jitendra, Shammi Kapoor and Dharmendra continued to bask in the glory of back to back hits, the actresses were not far behind. Right from the time of Savitri, Vyjayanthi Mala, Nargis, Waheeda Rahman and Sharmila Tagore to Sridevi, Rekha, Smita Patil, Hema Malini, several actresses became heartthrobs of the nation.

During the late 1980s and early 1990s, the pendulum swung back toward family-centric romantic musicals with the success of such films as Qayamat Se Qayamat Tak, Mr. India, Maine Pyar Kiya, Dil, Hum Aapke Hain Kaun and Dilwale Dulhania Le Jayenge. During the late 80â€™s the film fraternity saw a new brigade of stars rising they were the three Khans â€“ Salman, Shah Rukh and Aamir. Also popular among the masses and carving a niche for themselves were Akshay Kumar, Rajnikant and Govinda with their unique acting abilities.

The 90s era was a mixed genre of romantic, thrillers, action and comedy films. A stark upgrade can be seen on the canvas as technology gifted the industry Dolby digital sound effects, advanced special effects, choreography and international appeal. The development brought about investments from the corporate sector along with finer scripts and performances. It was time to shift focus to aesthetic appeal.

Actresses, such as Sridevi, Madhuri Dixit, Juhi Chawla and Kajol were much appreciated. Films like Hum Aapke HAin Kaun, Dilwale Dulhania Le Jayenge and Kuch Kuch Hota Hai made a mark in the Bollywood. The critical and commercial success of Satya in 2005, led to the emergence of a distinct genre known as Mumbai noir urban films reflecting social problems in the city of Mumbai. This led to a resurgence of Parallel Cinema by the end of the decade. These films often featured actors like Nana Patekar, Manoj Bajpai, Manisha Koirala, Tabu and Urmila Matondkar, whose performances were usually critically acclaimed.

Also Read: Here’s why Anushka Sharma is annoyed with media

The year 2000 started with a bang with Hrithik Roshanâ€™s debut Kaho Na Pyar Hai with debutant Amisha Patel. Kaho Naa… Pyaar Hai was the biggest Bollywood commercial success of 2000 and won many awards, including eight Filmfare Awards. Rakesh Roshan collected his first ever Filmfare Award, which he won as producer and as director. Hrithik became the only actor to win both, the Filmfare Award for Best Debut with the Filmfare Award for Best Actor for the same film. He was praised by young and old for his acting and dancing abilities. The movie was a blockbuster in Kerala and Tamil Nadu.

The 2000s saw a growth in Bollywoodâ€™s popularity in the world. This led the nationâ€™s filmmaking to new heights in terms of quality, cinematography and innovative story lines as well as technical advances in areas such as special effects, animation, and so on. Due to the emergence of new age filmmakers like Anurag Kashyap, Rajkumar Hirani, Dibakar Banerjee and Vishal Bhardwaj, Hindi cinema has undergone a massive change. Film like Lagaan (2001) and Black (2005) took the entire industry by storm. Filmmakers started experimenting and thus actors started working out more. Some popular films of the decade were Koi… Mil Gaya (2003), Kal Ho Naa Ho (2003), Veer-Zaara (2004), Dhoom (2004), Dhoom 2 (2006), Krrish (2006), Jab We Met (2007), Barfi (2012), Dhoom (2013), Kick (2014) and a few more. These films starred established actors. However, 2000s saw the rise of a new generation of popular actors like Hrithik Roshan, Saif Ali Khan, Shahid Kapoor, and Abhishek Bachchan as well as a new generation of popular actresses like Rani Mukerji, Preity Zinta, Aishwarya Rai, Kareena Kapoor and Priyanka Chopra.

Actors like Salman Khan and Akshay Kumar became known for making big-budget masala entertainers like Dabangg and Rowdy Rathore opposite younger actresses like Sonakshi Sinha. These films were often not critically acclaimed, but were often major commercial successes. While most stars from the 2000s continued their successful careers into the next decade, the 2010s also saw the rise of a new crop of actors like Ranbir Kapoor, Imran Khan, Ranveer Singh, and Arjun Kapoor, as well as actresses like Vidya Balan, Katrina Kaif, Deepika Padukone, Anushka Sharma, and Parineeti Chopra. Slowly films started entering 100-crore club. Films like Dabangg, Krishh 3, Dhoom 3, Kick, and Chennai Express created history.

As the world has become a global village, the Indian film industry has reached out further to international audiences. Apart from regular screenings at major international film festivals, the overseas market contributes a sizeable chunk to Bollywoodâ€™s box office collections. Regular foreign Investments made by major global studios such as 20th Century Fox, Sony Pictures, and Warner Bros put a stamp of confirmation that Bollywood has etched itself on the global podium.

Indian cinema, despite all its peculiarities, has been a reflection of the socio-economic, political and cultural changes that took place in the country. Hoping that Indian movies continue to entertain us the way theyâ€™ve been doing since 10 decades.

Also Read: One must visit this unique airplane-themed restaurant in Punjab