A day after the house arrest of 26/11 attack mastermind Hafiz Saeed, the Minister of External Affairs on Tuesday issued a statement calling Islamabad action mere tokenism and urged it to take “credible” action against terrorist outfits. 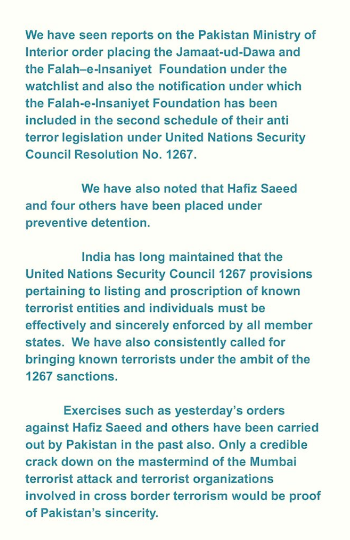 He “is at Masjid-e-Qadsia Chauburji and a heavy contingent of police has surrounded the JUD headquarters,” JUD official Ahmed Nadeem, who was present at the premises of the outfit, told PTI.

“The commanding police officer told us that he has with him the house arrest order of the JUD chief issued by the Punjab Home Department,” Nadeem said.

Three days back, Punjab’s Ministry of Interior had included names of Saeed and four others — Abdullah Ubaid, Zafar Iqbal, Abdur Rehman Abid and Qazi Kashif Niaz — in the Watch List as per UNSC 1267 Sanctions and ordered their preventive detention.

Punjab government’s action comes amidst pressure on Pakistan from the Trump administration that it must take action against JUD and Saeed to avoid sanctions.

JUD is the front for the banned Lashkar-e-Taiba (LeT) terror outfit which is responsible for numerous terror attacks in India, including the Mumbai terror strike of 26 November 2008, which was masterminded by Saeed.

The Ministry of Interior, in its 27 January order, has “placed Falah-e-Insaniat Foundation (FIF) and JUD on the Watch List and has listed these organisations in the Second Schedule of the ATA 1997 (as amended).

Our response to the preventive detention of Hafiz Saeed and others in Pakistan pic.twitter.com/hhGJXFfyc1

“Saeed, Ubaid, Iqbal, Abid and Niaz are reportedly active members of the aforementioned organisations within the meaning of Section 11EEE(1) of the ATA 1997 (as amended). As such, they must be placed under preventive detention,” Pakistani media reported.

The notification asked the Pakistan home secretary to “kindly direct the concerned agencies to move and take necessary action” as the matter “is most urgent”.

Saeed also carries a reward of $10 million announced by the US for his role in terror activities.