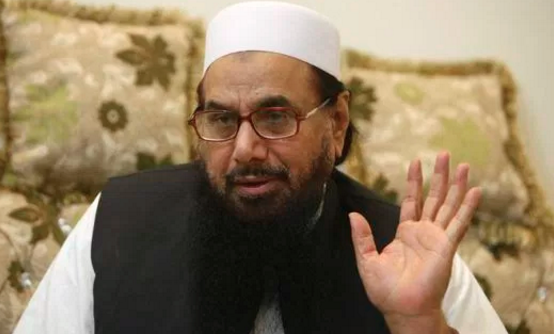 Mumbai terror attack mastermind and Jamaat-ud-Dawa chief (JuD)  Hafiz Saeed has reportedly been put under house arrest in Lahore on Monday, according to a spokesman for Saeed’s organisation. Police arrived at the headquarters of the Jamaat ud Dawa charity that Saeed runs in the eastern city of Lahore with orders to place him under house arrest, JuD spokesman Yahya Mujahid told reporters by telephone.

ALSO READ: India and Pakistan were on the brink of a Nuclear War!

Saeed’s continued freedom has been a source of continuing friction between Pakistan and its longtime foe India as well as the United States.”These steps are being taken to please India,” Mujahid said.

Punjab government’s Home Department has issued detention order of Saeed and Lahore Police have reached JuD headquarters in Chauburji to implement the order, his outfit said. He “is at Masjid-e-Qadsia Chauburji and a heavy
contingent of police has surrounded the JuD headquarters,” JuD official Ahmed Nadeem, who is present at the premises of the outfit, told PTI by phone. “The commanding police officer told us that he has with him the house arrest order of the JuD chief issued by the Punjab Home Department,” Nadeem said.

Punjab government’s action comes amidst pressure from the Trump administration to act against terror. The US has clearly told Islamabad that in case of not taking action against JuD and Saeed, it may face sanctions.