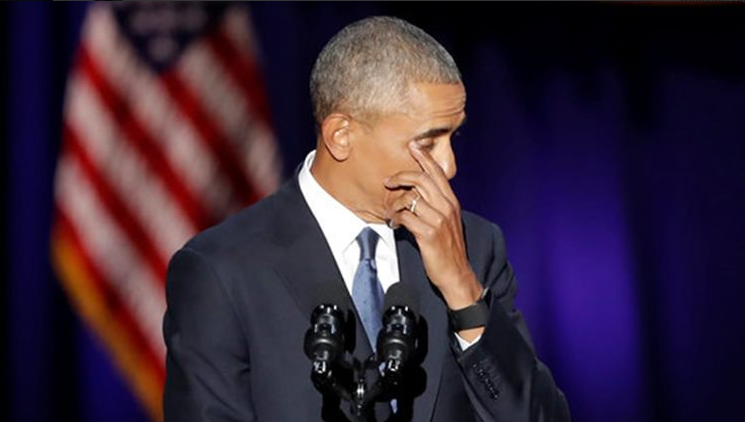 US President Barack Obama gave his farewell speech from Chicago, today.  We Bring top 10 from the Speech:

1. He started with thanking every on behalf of Michelle and himself. He said, “I have been so touched by all the well wishes we have received in the past few weeks, tonight its my time to say thanks.”

Also Read: Rahul unlikely to visit China because of polls

3. To the Vice President, Joe Biden, Obama thanked and said, “You were first choice I made as a nominee, and it was the best; in the bargain, I gained a brother.”

4. To the people of America, he said, “I am asking you to believe. Not in my ability to bring about change, but in yours. I learned that change only happens when ordinary people get involved, get engaged, and come together to demand it”

5. From the podium, Obama took the opportunity to thank his wife and the first lady, Michelle, “And a new generation sets its sights higher because it has you (Michelle) as a role model. You’ve made me and the country proud.”He also called her, his best friend.

6. While, something which could be seen as a comment on the incoming President Trump, “We weaken ties when we write off whole system as inevitably corrupt & blame leaders we elect without examining our own role in electing them.”  He added, “The bubbles and rise of naked partisanship is a threat to our democracy.”

7. While referring to immigrants and religious choices, he said, “I reject discrimination against Muslim Americans. We must invest in children of immigrants, because those brown kids, represent growing share of the workforce. Race remains a potent and often divisive force in our society.”

8. On terrorism, and US response, he said, “ISIL will be destroyed, no one who threatens America will ever be safe. We’ve taken out tens of thousands of terrorists, including Osama bin Laden. No foreign terrorist organization has successfully planned and executed an attack on our homeland these past eight years.”

9. Affirming the belief in the agencies, “Although Boston and Orlando remind us of how dangerous radicalization can be, our law enforcement agencies are more effective than ever.”

10. On transition to the next incoming President, Obama said, “I am committed to Trump that my administration would ensure a smooth transition.”

While the last lines from the speech would surely make a resonance in the world, “Yes We Can. Yes We Did. Yes We Can. Thank You. God Bless You. And May God Continue To Bless The United States of America.”