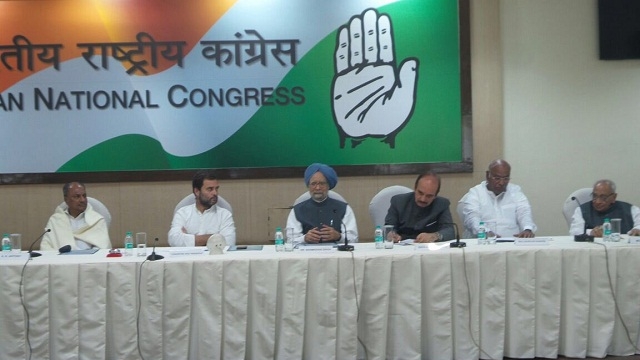 This is the first time that Rahul has presided over the meeting which is being attended by Congress top brass.

Senior party leaders Manmohan Singh, P Chidambaram, Ghulam Nabi Azad, Janardan Dwivedi, Ahmed Patel, Ambika Soni and A K Antony are among those attending the meet and will decide on the possible deferring of organisational election to next year.

The meeting assumes significance as it comes ahead of winter session of Parliament starting November 16 where the Congress is seeking to corner the government on several issues including freedom of speech and expression in the wake of the one-day ban on a Hindi news channel over its coverage of Pathankot terror attack.

The controversies over the surgical strike, killing of eight Students Islamic Movement of India (SIMI) activists in an alleged encounter in Madhya Pradesh, triple talaq, and uniform civil code are also likely to be raised by the Congress.

The meeting is unlikely to take a decision on the elevation of Rahul Gandhi as a section within the party feels that this should be done after the assembly elections in Uttar Pradesh and Punjab.

The organisational elections in Congress are overdue and the party had sought time from the Election Commission to complete the process by December 31. The party had informed the poll panel about it as required under the rules.

Besides the organisational polls and the strategy to be adopted for Parliament session, the meeting would also take stock of the current political situation and discuss its plans for assembly elections in some states including Uttar Pradesh and Punjab due next year.

ALSO READ: Hillary Clinton is the only candidate who will bring Americans together: Obama

The CWC meeting comes at a time when a section of party men feels that Congress President Sonia Gandhi, 69, should hand over the mantle to her son as she is suffering from ill health, especially after her roadshow in PM Narendra Modi’s constituency of Varanasi on August 2 when she was hospitalised.