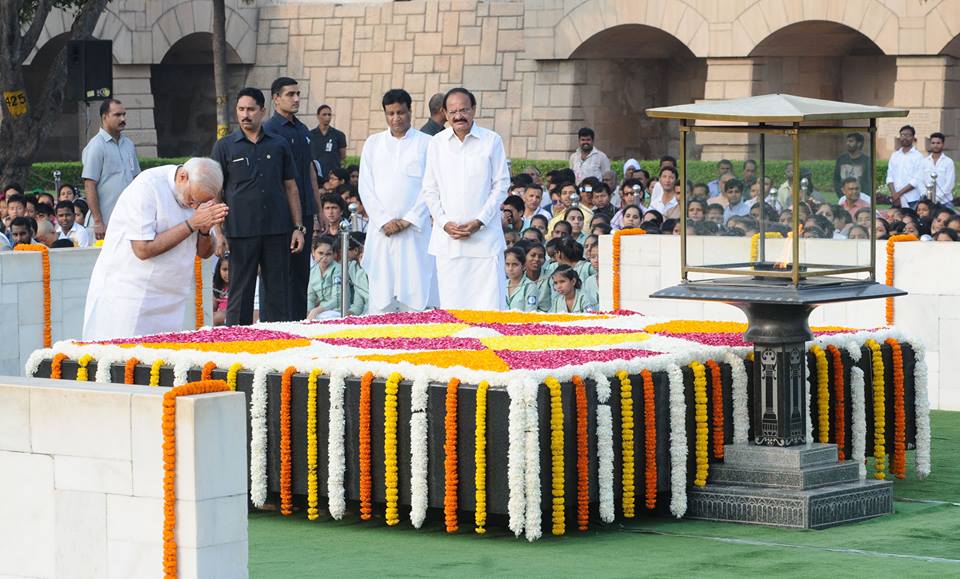 New Delhi: The nation on Sunday remembered Mahatma Gandhi on his 147th birth anniversary, with President Pranab Mukherjee, Prime Minister Narendra Modi and other leaders paying floral tributes to him at his memorial here.

“Gandhiji made this world a better place. His ideals, dedication to the poor & struggle against injustice inspire,” the Prime Minister said in a tweet.

At Rajghat. Remembering Bapu’s teachings and his impact on our nation. pic.twitter.com/9vSTe6uYQY

Clad in a white kurta and pyjama, Modi, who arrived at 7:40 AM, paid homage to the Mahatma by offering rose petals at his memorial and performing a ‘parikrama’ (circumambulation) around it.

Union Ministers M Venkaiah Naidu and Rao Inderjit Singh, and Congress leader Ghulam Nabi Azad too joined in paying homage to the Father of the Nation.

Delhi Chief Minister Arvind Kejriwal, who arrived along with his deputy Manish Sisodia, also paid tributes to the Mahatma on his birth anniversary.

Ambassadors of several countries and other dignitaries attended the function. A large number of school children had also gathered at the venue to pay homage.

An all-faith prayer meeting was held on the occasion.