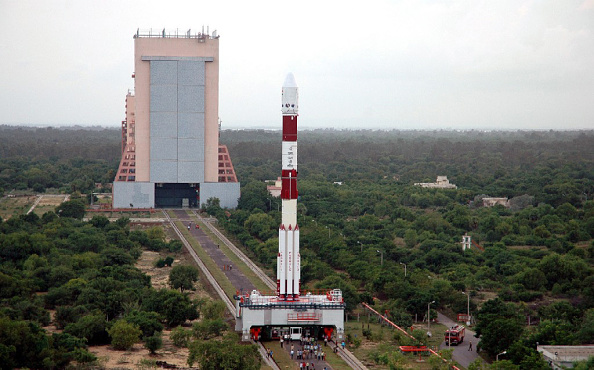 PSLV C-35, carrying India’s SCATSAT-1 meant for ocean and weather studies and seven other satellites including from the US and Canada, lifted off from the spaceport on Monday morning.

Besides SCATSAT-1, the 44.4 metre tall ISRO‘s workhorse PSLV rocket is carrying two Indian university satellites, three from Algeria and one each from the US and Canada. For the first time in its mission, the PSLV will launch its payloads in two different orbits. There will be two Fourth Stage Engine restarts for this purpose.

PSLV C-35 took off from the Satish Dhawan Space Centre at Sriharikota, about 110 km from Chennai at 9.12 AM. SCATSAT-1, the primary satellite, is meant for weather forecasting, cyclone detection, and tracking. It is a “continuity” mission for the Ku-band scatterometer payload carried by SCATSAT-1, which has enhanced features compared to a similar one carried by Oceansat-2 satellite in 2009, ISRO said.

The two academic satellites are PRATHAM, from IIT, Bombay, and PISAT, from BES University, Bengaluru, and its consortium. While PRATHAM’s objective is to estimate Total Electron Count, PISAT’s mission is to design and develop a nanosatellite for remote sensing applications. The foreign satellites on board the PSLV are ALSAT-1B, ALSAT-2B and ALSAT-1N (all from Algeria) and Pathfinder-1 and NLS-19, from USA and Canada, respectively.

Meanwhile, PM Narendra Modi has greeted all the scientists and the team for the successful launch of the satellites.

Our space scientists keep scripting history. Their innovative zeal has touched the lives of 125 crore Indians & made India proud worldwide.

He said in a tweet, our space scientists keep creating history. Their innovative zeal has touched the lives of 125 crore Indians & made India proud worldwide.