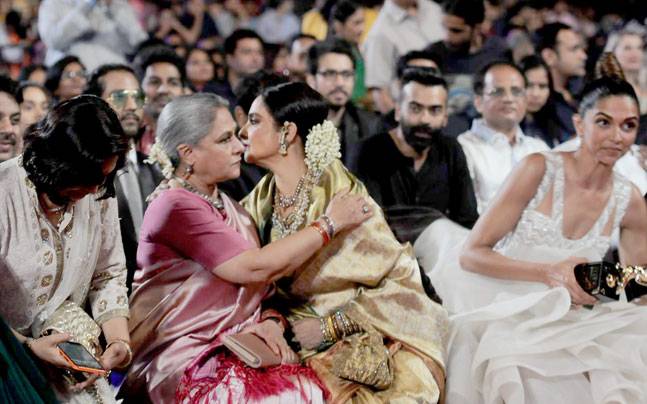 Vintage gossip always turns out to be more dramatic and scandalous than the stuff we hear these days. Maybe because there was no PR agency to clean up an actor’s image or there wasn’t enough paparazzi to document every move of the stars, but Rekha‘s biography – Rekha: The Untold Story, written by Yasser Usman has tried to uncover everything about the actress’s life. One such instance is the time she created a stir at Rishi and Neetu Kapoor‘s wedding.

Rekha walked in wearing a mangalsutra and sindoor on her head. The photographers went snapping away, but onlookers were sure she did this to get Amitabh Bachchan‘s attention. Amitabh and his wife Jaya were present at the wedding, and after a while, Rekha walked up to him and the two had a formal conversation. According to a report in Stardust – “Jaya tried to keep a stoic front for a long time, but eventually she had to bend her head and let the tears roll down.”