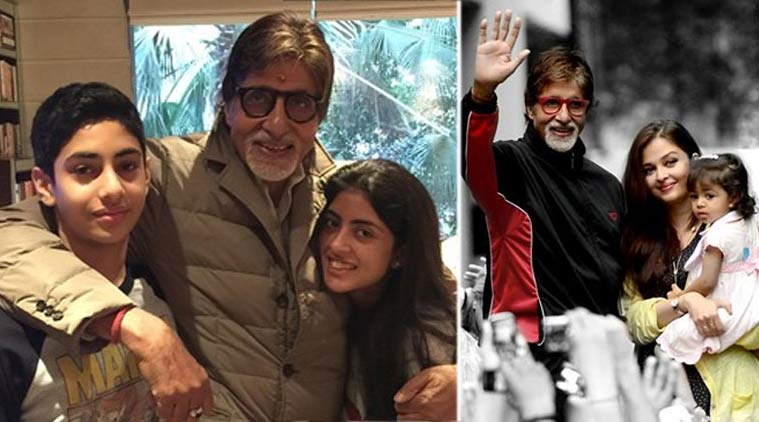 Amitabh Bachchan is a proud and doting grandad to two girls — Abhishek and Aishwarya Rai Bachchan’s daughter Aaradhya and Nikhil and Shweta Nanda’s daughter Navya Naveli. And on Sunday (September 4), he penned a letter to both of them. With gender issues getting so much play in India and yet crimes against women being at all-time high, the letter assumes significance.
Not happy with just writing it, he also read it aloud to them on a video, which he shared on Twitter. Talking to Aaradhya, he said, “I don’t know when you will see it but this is how I looked in year 2016.” He further told both of them that he will put it on Twitter because it is not a letter meant for both of them but “all granddaughters.”

He makes it clear that it is not just the faceless that women are at risk from, but also people they know, even friends and family at times. Big B talks about all the issues in the letter. He tells them both to “make your own choices in the light of your own wisdom” and “never worry about log kya kahenge”.

What makes the letter pertinent for every young girl out there is its wisdom. Amitabh accepts that “privilege your name, your surname offers” will not protect Navya and Aaradhya “from the difficulties you will face because you ‘re a woman”.

While it is a difficult world to be a woman, he says, the reality can be changed by girls like his granddaughters. He says if that can happen, it would be an honour to be known as Aaradhya and Navya’s grandfather.
Big B tells his granddaughters not to be bogged down, not let others dictate their lives for them. He wants them to marry the ones they choose or let others make their decisions for them. Because, in the end, their decisions will decide what they face in life. 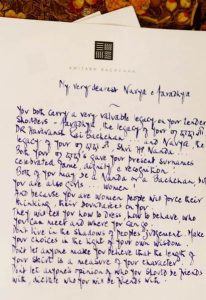 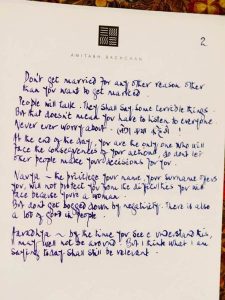 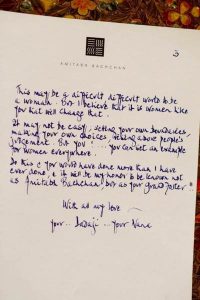 Both your pardadaji ‘ s gave your present surnames celebrated fame, dignity and recognition !

Both of you may be a Nanda or a Bachchan, but you are also girls…women !

And because you are women people will force their thinking, their boundaries on you.

They will tell you how to dress, how to behave, who you can meet and where you can go.

Don’t live in the shadows of people’s judgement. Make your own choices in the light of your own wisdom.

Don’t let anyone make you believe that the length of your skirt is a measure of your character.

Don’t get married for any other reason other than you want to get married.

People will talk. They shall say some terrible things. But that doesn’t mean you have to listen to everyone. Never ever worry about – log kya kahenge.

At the end of the day, you are the only one who will face the consequences of your actions, so don’t let other people make your decisions for you.

Navya – the privilege your name, your surname offers you, will not protect you from the difficulties you will face because you’re a woman.

Aaradhya – by the time you see and understand this, I may well not be around. But I think what I am saying today shall still be relevant.

This may be a difficult, difficult world to be a woman. But I believe that it is women like you that will change that.

It may not be easy, setting your own boundaries, making your own choices, rising above people ‘s
judgement. But YOU !…you can set an example for women everywhere.

Do this and you would have done more than I have ever done, and it will be my honor to be known not as Amitabh Bachchan, but as your grandfather !!

With all my love

He also posted a video of the letters he wrote to his grand daughters on social media: