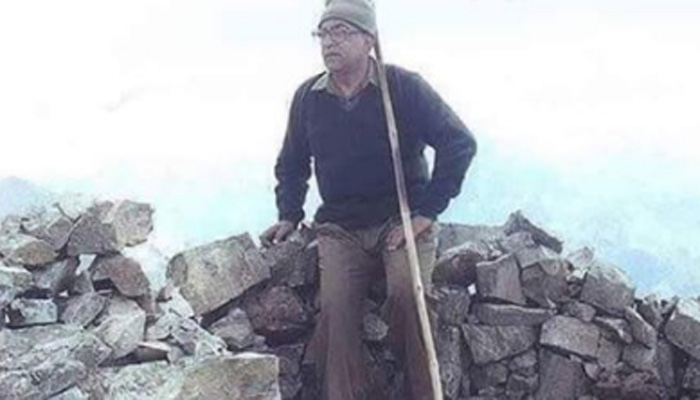 Colonel (retired) Vijendra Thapar climbed 16,000 feet to fulfill his son’s last wish. Captain Vijayant Thapar, hailed as the hero of the battle of Tololing, sacrificed his life at the Tololing peak while fighting against Pakistani infiltrators.

Leading a Rajputana Rifles regiment, Captain Thapar was just 22 years old when he was martyred on June 29th, 1999. He was awarded the Vir Chakra posthumously for his bravery.

In his last letter, released by the Indian Army on social media, Captain Thapar wished for his family to visit the spot where “Indian army fought for your tomorrow.” To honors his wish, his father, Col VN Thapar made his way to the very spot where his son laid down his life for the nation.

The Thapar’s have served the Indian army for several generations and Captain Thapar was carrying forward his family’s legacy.

According to the family’s website: captainvijayantthapar.com,”before the final assault Capt. Vijyant Thapar (Robin) left this letter at the from the attack area, to be handed over to his family in case he failed to return.”

Dearest Papa, Mama and Granny,
By the time you get this letter I’ll be observing you all from the sky enjoying the hospitality of the Apsaras. I have no regrets, in fact even I become a human again, I’ll join the Army and fight for my Nation. If you can, please come and see where the Indian Army fought for you tomorrow.
As far as the unit is concerned the new chaps should be told about this sacrifice. I hope my photo will be kept in the ‘A’ Coy Mandir. Whatever organ can be taken should be done. Contribute some money to orphanage and keep on giving Rs 50/ to Ruksana per month and meet Yogi Baba.
Best of luck to Bindia, never forget this sacrifice of men. Papa you should feel proud, Mama so should you meet **** (I loved her).
Mamaji forgive me for everything wrong I did. Ok then its time for me to join my clan of dirty dozen, my assault party has 12 chaps.
Best of Luck to you all,
Live life King Size,
Yours Robin