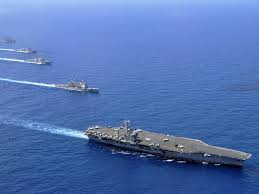 Raising its pitch over tensions on the disputed South China Sea, China today called for preparations for a “people’s war at sea” to counter offshore security threats while its top court warned foreigners of criminal liability for violations of its maritime rights.

Chinese Defence Minister General Chang Wanquan has warned of offshore security threats and called for substantial preparation for a “people’s war at sea” to safeguard sovereignty.
Chang said the military, police and people should prepare for mobilisation to defend national sovereignty and territorial integrity.

His comments followed verdict of international tribunal on July 12 that struck down China’s claims over the South China Sea and raised tensions between China and Japan over the disputed islands in the East China Sea.

Two days ago while addressinga reception to celebrate 89th founding anniversary of the 2.3 million-strong People’s Liberation Army (PLA), China said it will “staunchly” protect the country’s maritime rights and interests and is “fully confident and capable of addressing various security threats and provocations”.

Meanwhile, China’s Supreme Court today issued a regulation to reaffirm its jurisdiction over the country’s territorial seas and warned Chinese and foreigners of criminal liability for violations like illegal fishing, Xinhua reported.

The regulation, taking effect on Tuesday, stated that Chinese citizens or foreigners would be pursued criminal liability if they were engaged in illegal hunting or fishing, or killing endangered wildlife in China’s jurisdictional seas.

The Court regulation followed assertions by the Chinese military to protect the country’s maritime rights and interests in the backdrop of increasing tensions over the SCS after an international tribunal struck down Beijing’s claims.