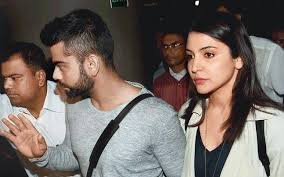 Virat Kohli is everywhere! On the newspapers, on TV headlines,on social media everywhere! And why not? His blockbuster Sunday performance is too good and everyone seems to be in awe of him.

But Virat Kohli is in the news for one more reason. He has recently come out in support of Anushka Sharma against the social media trolls. A leading daily, published a story on Monday morning with a headline saying, ” Will Virat Kohli get a message from Anushka Sharma tonight?”

This has perhaps irked the ‘genius’ batsman and though they may not be dating anymore, this gentleman has strongly come out in support of his former lady love.

Kohli took to twitter and instagram to express his disappointment over Anushka being dragged into everything related to him and this is what our champion cricketer had to say:

Shame on people for trolling @AnushkaSharma non-stop. Have some compassion. She has always only given me positivity pic.twitter.com/OBIMA2EZKu

Shame on those people who have been having a go at anushka for the longest time and connecting every negative thing to her. Shame on those people calling themselves educated. Shame on blaming and making fun of her when she has no control over what i do with my sport. If anything she has only motivated and given me more positivity. This was long time coming. Shame on these people that hide and take a dig. And i dont need any respect for this post. Have some compassion and respect her. Think of how your sister or girlfriend or wife would feel if someone trolled them and very conveniently rubbished them in public. #nocompassion#nocommonsense

Well, that’s truly an act of a gentleman we must say!