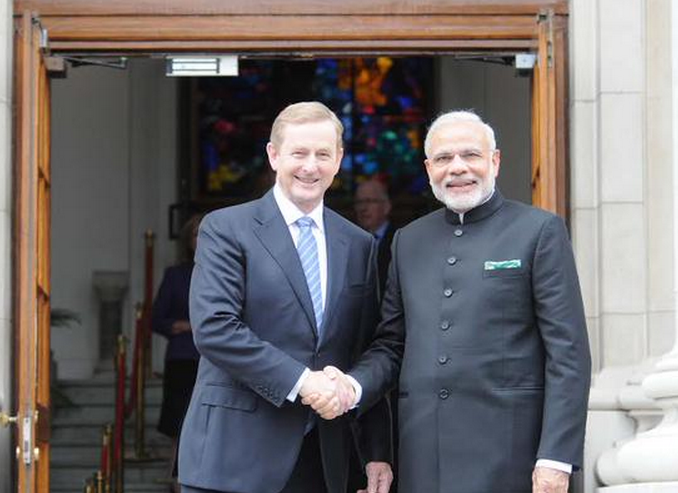 PM Modi presented reproductions of selected manuscripts and papers from the National Archives of India to Kenny.

Modi also presented Kenny a specially handcrafted piece of silver marble and roughly hewn sandstone rock that imagines the Irish symbol of shamrock as a votive candle-stand or an aarti lamp, with a peacock perched by the side of shamrock leaves, along with silver-tipped crystal dewdrops signifying serenity and purity.

The Irish Prime Minister presented Modi with an Irish cricket team jersey and a Hurling bat and ball.

Connecting through sports…PM @narendramodi gets a jersey of the cricket team of Ireland from Mr. @EndaKennyTD. pic.twitter.com/LgzaY5MNY6

Not only cricket but also hurling…PM @narendramodi gets a sliotar and a hurley. Hurling is popular in Ireland. pic.twitter.com/ei98yNnAvY

Modi arrived in Dublin today on the first leg of his two-nation trip to Ireland and United States.

This is the first visit by an Indian Prime Minister to Ireland in 60 years.