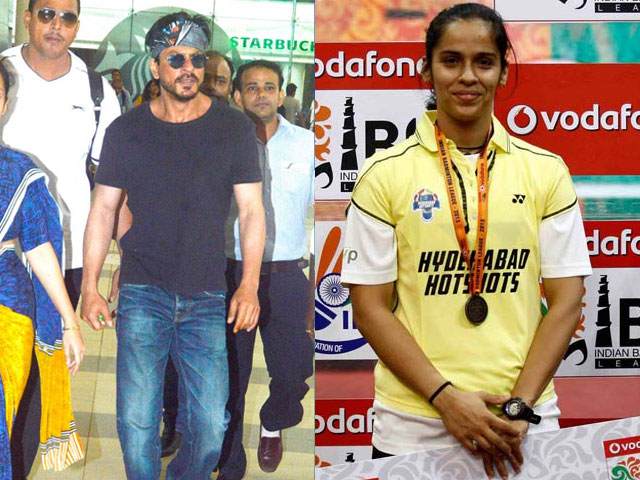 Badminton star Saina Nehwal recently wished to meet none other than superstar Shah Rukh Khan as he was shooting in her hometown for ‘Dilwale’.

The humble King Khan tweeted back and they decided to meet:

@iamsrk sir can we meet tomorrow let me know I will come . I live in Hyderabad 😊

@iamsrk sure sir thank u

The ‘Happy New Year’ star kept his promise and met the badminton ace on the set of ‘Dilwale’.

Shah Rukh who joined Instagram after two years shared a picture of Saina with a badminton racquet without any strings in her hand.

He captioned it with the famous Mohammed rafi- Asha Bhosle song, ‘Dhal Gaya Din Ho gai Sham’. The song from the flick ‘Hamjoli’ also had a ‘badminton match’ scene.

Made sure @NSaina had no strings in her racquet..maybe the only way 2 beat her at badminton. U hav a lovely family. pic.twitter.com/vbwpdjGk5i

Shah Rukh’s reason for ‘no strings’ in Saina’s racquet:

Even the super excited Saina also posted a picture saying:

Oh my GOD 😘😘😘😘😘Shahrukh sir ur such a nice person very happy to meet u . U made my day thank u so much 👍👍 pic.twitter.com/NbAg5anYz3

Not only King Khan, she had also met Kajol earlier. She also posted pictures with Varun Dhawan and Kriti Sanon, whom she met on the set.

“I would like to thank Rohit Shetty sir the director for showing us the ‘Dilwale’ shooting amazing person.”

The film is set to woo the audience on December 18.