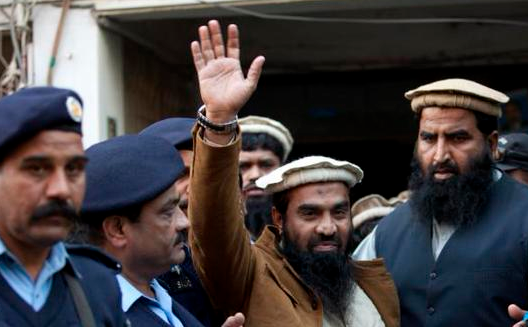 The US, France and Israel joined India in criticising the release on bail of the LeT commander, with Washington saying it was â€œgravely concernedâ€ by the development.

Shortly after Lakhvi walked out of a jail on Friday, the issue came up during the talks between French President Francois Hollande and Prime Minister Narendra Modi, who is in Paris. Hollande described the release of the Lashkar-e-Taibaâ€™s operations commander as “deeply shocking”.

In a speech in Paris, Hollande thanked Prime Minister Modi for his “solidarity” over the Islamist attacks in the French capital in January.Â

“In the same vein, I express to you my indignation each time that a terrorist is freed while he still has responsibility for an abominable act,” Hollande said.Â

Terming the release of Lakhvi by Pakistan as “unfortunate”, French lawmakers said the development was not good for eitherÂ IndiaÂ or the world.

Â The US State Department said it had conveyed its concerns over Lakhviâ€™s release to Pakistan as recently as Thursday and urged Islamabad to deliver on its commitment to prosecute those responsible for the Mumbai attacks, which left 166 people dead, including six Americans.

â€œWe are gravely concerned about the release on bail of alleged Mumbai attack mastermind Zaki-ur-Rehman Lakhvi. We have communicated that concern to senior Pakistani officials over the course of many months,â€ State Department spokesperson Jeff Rathke told a news briefing on Friday.
Â
â€œPakistan has pledged its cooperation in bringing the perpetrators, financiers, and sponsors of the Mumbai terrorist attacks to justice, and we urge Pakistan to follow through on that commitment to ensure justice for the 166 innocent people, including six Americans, who lost their lives,â€ he said.

â€œPakistan has pledged its cooperation in bringing the perpetrators, financiers, and sponsors of the Mumbai terrorist attacks to justice, and we urge Pakistan to follow through on that commitment to ensure justice for the 166 innocent people, including six Americans, who lost their lives,” Rathke further added.

Israel termed the release as “setback for the international efforts in the war against terror in which India and Israel are close partners”.

Israeli Ambassador Daniel Carmon in a statement said, “Israel is surprised and disappointed by the release of Zakiur Rehman Lakhvi, the mastermind of the Mumbai attack in which as part of the horrific attack also Israeli nationals and a Jewish Center – the Nariman House – were targeted. This release is a setback for the international efforts in the war against terror in which India and Israel are close partners.”

India on Friday had registered its strong concerns with Pakistan on the release of Lakhvi and said that it was a “most negative development” for bilateral ties.

New Delhi has repeatedly urged Pakistan to pursue the case more actively. Islamabad faced renewed pressure following the December attack by the Taliban on a school in the Pakistani city of Peshawar that killed nearly 150 people, mainly children.

“Our concerns on this issue have been made known to the Government of Pakistan in the past. These shall be reiterated. The fact is that known terrorists not being effectively prosecuted constitutes a real security threat for India and the world,” said a Ministry of External Affairs spokesperson on Thursday.

“This also erodes the value of assurances repeatedly conveyed to us with regard to cross border terrorism,” he said.

He underlined that this has reinforced the perception that Pakistan has a dual policy on dealing with terrorists and those who have carried out attacks or are posing a threat to India are being dealt with differentlyâ€.

A close relative of LeT founder and JuD chief Hafiz Saeed, Lakhvi, 55, guided 10 LeT gunmen from a control room in Pakistan during 26/11, walked free after being under detention for six years.Â  The trial has been underway since 2009.