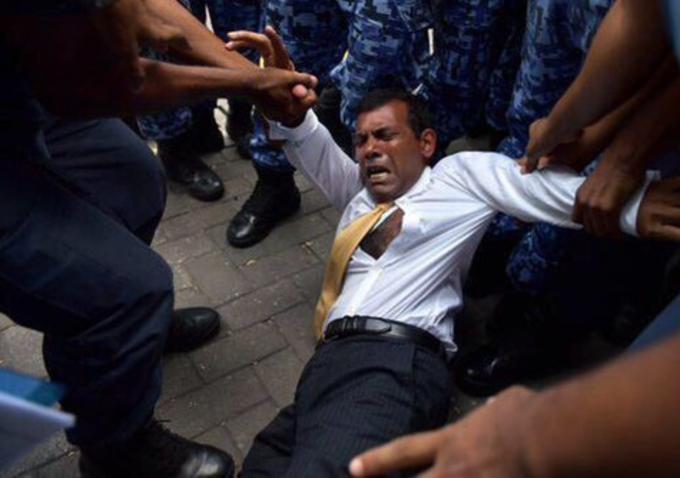 Concerned that Nasheed will soon be convicted and sentenced for trumped up charges of terrorism by his political rivals, several prominent documentary filmmakers and activists, includingÂ Robert F. Kennedy Jr.,Â Oscar-winning filmmakerÂ LouieÂ Psihoyos (“The Cove”), and actor Fisher Stevens,Â are fighting to get the word out about his fate.Â

India which has a strong strategic relationship with Maldives demonstrated its displeasure when the Prime Minister Narendra Modi cancelled a scheduled visit to the country as part of his Indian Ocean diplomatic visit that will take him to Seychelles, Mauritius and Sri Lanka beginning on March 8.

Impact Partners’ head and “The Island President” executive producer Dan Cogan was quoted on the Â Huffpost liveÂ calling the proceedings against Nasheed “a kangaroo court set up to convict him, and it should be very concerning for anyone who believes in the rule of law and democratic government.”

The group has signed an Open Letter in support of former President Nasheed, which is included below, along with its signatories.Â

People were encouraged to give their support by signing in the Comments section of this post. Readers can also sign aÂ petitionÂ onÂ Change.org, which is currently running a thousand signatories short of its 5,000 number goal.

The undersigned call on the international community, including the U.S., the UK,Â the EU, India and the Commonwealth, to use all resources at its disposal toÂ pressure the government of the Maldives to free President Mohamed NasheedÂ and desist in all human rights abuses against him immediately.

Pro-Democracy and Climate hero Mohamed Nasheed, the first-everÂ democratically elected President of the Maldives, has been arrested and detainedÂ in jail without legal representation by the authoritarian regime of YameenÂ Gayoom. Yameen is the half brother of Maumoon Gayoom, a dictator who ruledÂ the Maldives with an iron fist for 30 years. This arrest is part of a broad sweep toÂ wipe out all political opposition in the country. If sentenced, President NasheedÂ faces 10-15 years in prison. We cannot allow it to happen.

President Nasheed was forced from office in 2012 in a coup dâ€™etat, yet hasÂ remained a vital voice in the pro-democracy and climate justice movements.

OnÂ February 22 this year, he was violently arrested and jailed in his home country onÂ politically motivated charges. President Nasheedâ€™s arrest comes in the wake of aÂ collapse of Yameenâ€™s coalition government, and amidst calls for by Yameenâ€™sÂ resignation by the countryâ€™s two largest opposition political parties and hundredsÂ of thousands of ordinary Maldivian citizens.

President Nasheed was injured while he was physically dragged into theÂ courtroom by police on February 23. He has been repeatedly denied both legalÂ representation and medical attention.

The U.S., the United Nations, the European Union, India, Canada and theÂ Commonwealth have all denounced the arrest and treatment of PresidentÂ Nasheed. But we need to keep the pressure up until he is freed from prison.

Formerly an Amnesty International â€œPrisoner of Conscienceâ€ who was jailed forÂ more than six years for writing articles critical of the government as a journalist,Â President Nasheed defeated Maumoon Gayoom in the Maldivesâ€™ first-ever freeÂ and fair election in 2008. Known worldwide as the â€œMandela of the Maldives,â€Â Nasheed also became an international hero of the climate change movement forÂ setting a goal of making his nation carbon neutral by 2020, and by dramaticallyÂ improving the climate talks at the 2009 UN Copenhagen Conference. He receivedÂ the prestigious James Lawson Award for Non-Violent Conflict Resolution, as wellÂ as the Sylvia Earl Blue Mission Award for climate advocacy. Nasheed is theÂ subject of the acclaimed documentary â€œThe Island President.â€ In 2009, he wasÂ named a TIME â€œhero of the environmentâ€ and in 2012, was included inÂ NEWSWEEKâ€™s â€œWorldâ€™s 10 Best Leaders.

The United Nations, European Union and the Commonwealth have all expressedÂ concern over the lack of independence of the Maldivian judiciary. It is this veryÂ judiciary, composed of hand picked justices of the Gayoom dynasty, that willÂ decide whether Nasheed will be sentenced on these politically motivated charges.Â President Nasheedâ€™s arrest has led to thousands of supporters taking to theÂ streets in protest.

We firmly believe that international pressure on the regime can help to end theÂ illegal and politically motivated trial against President Nasheed.