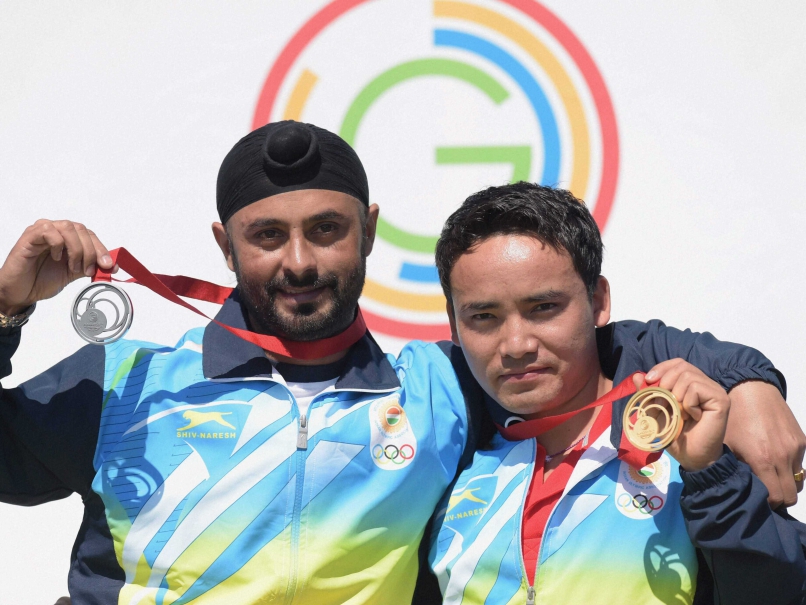 The 21-year-old Vikas lifted a total of 333kg â€“ 150kg in snatch and 183 in clean and jerk. Both Vikas and Canada’s Pascal Plamondon were tied on 333kg but Vikas won Silver on the account of lesser body weight.

Earlier in the day, the 26-year-old Rai, World Number 4 in the event, gave ample display of his class by taking the honour in the men’s 50 m pistol event as the Indian shooters continued to dominate the ranges.

Gurpal Singh also took the spotlight with his silver-winning effort in the same event while Narang, taking part for the first time in the 50 m rifle prone event, had to be content with a silver as the shooters did the bulk of the medal shopping during the day.

With the addition of three more medals, India’s overall medal haul swelled to 26 with seven gold, 12 silver and seven bronze medals and were currently placed seventh in the medal standings.

Rai shot 194.1 to bag his first Commonwealth Games gold on debut while Gurpal had an aggregate of 187.2 to win the silver, his first international medal. Australia’s Daniel Repacholi was third.

With the three medals, India’s medal tally from the Barry Buddon Shooting Center has shot up to 12 (4, 7, 1), three more than England who have eight including three gold medals.

Nepal-born Rai, who won a gold (in 10m air pistol) and a silver (in 50m pistol) in the World Cup last month, was third in the first series but then recovered quickly and led the field throughout after that.

Narang collected 203.6 in the 20-shot final round, while gold-winner Potent scored 204.3. Kenneth Parr of England bagged the bronze.

This is Narang’s first Commonwealth Games medal in his first appearance in 50m rifle prone event which is not his pet event. Narang, who won a bronze in men’s 10m Air Rifle in 2012 London Olympics, will also take part in men’s 50m rifle 3 position event tomorrow.

This is also India’s second medal in this event in the Commonwealth Games, with Sanjiv Rajput having won a bronze in the 2006 Melbourne Games.

Narang failed to become only the third shooter to win nine gold medals in the Commonwealth Games but he still has a chance to achieve the feat when he takes the field in 50m rifles 3 position. India’s Jaspal Rana and England’s Michael Gault have won nine gold in Commonwealth Games.

In boxing, Asian silver-medallist Devendro Singh (49kg) made the quarterfinals after notching up a hard-fought 2-1 victory over Sri Lanka’s Madushan Gamage. The 22-year-old Manipuri will face Scotland’s Aqeel Ahmed in the last-eight stage on July 30.

India drew a blank in the badminton mixed team event after going down fighting to Singapore 2-3 in the bronze medal play-off. Despite star attraction Saina Nehwal’s pull out from the Games in the last minute, there were high expectations from Indian shuttlers especially with P V Sindhu, Parupalli Kashyap and reigining Commonwealth women’s doubles champion pair of Jwala Gutta and Ashwini Ponappa up their ranks. But the team failed to deliver when it mattered most to return empty handed from the mixed team event.

It was not the best of starts to the bronze medal encounter for 10th ranked India, who lost to 2010 Delhi Games bronze medallist England 0-3 in the semi-finals.

Indian men’s table tennis team failed to secure a medal for the first time at the Games after being stunned 1-3 by Nigeria in the bronze medal play-off at the Scotstoun Sports Campus.

India, who suffered a heart-breaking 1-3 loss against England in the semi-finals last night, were found listless against a defiant Nigerian outfit.

The unexpected loss meant Indian men will return empty handed from the team event for the first time since the sport’s introduction in the Games at Manchester in 2002. India’s foreign coach Peter Engel had expected the paddlers to win at least three medals in Glasgow but that prospect looks unlikely with a blank in team events. India won a record five medals in Delhi four years ago.

India’s wait for its first squash medal at the Commonwealth Games was prolonged with Saurav Ghosal’s fighting loss to Englishman Peter Barker in the bronze medal playoff. World No.16 Ghosal needed to come up something special for his first win over his eighth-ranked opponent. The Indian tried his best before going down 5-11 11-6 5-11 6-11. The Kolkata-based played had lost to England number two James Willstrop in the semi-finals on Sunday.

India’s leading women player Dipika Pallikal had suffered a quarterfinal loss against England’s Alison Waters and Joshana Chinappa bowed out of the competition in the round of 16. The squash contingent has a better chance of ending the medal drought in the doubles and mixed doubles event.

C Narayan Singh qualified for the finals of the men’s hammer throw event even as Kamalpreet Singh crashed out in the qualifying round. 23-year-old Narayan threw the hammer to a distance of 67.95 in his first attempt, which proved to be his best and enough to make it to the 12-man final.

Kamalpreet, competing in other group, finished sixth with his best throw of 65.25m, which came in his first attempt. He managed 62.90m and 63.67m in his next two attempts.