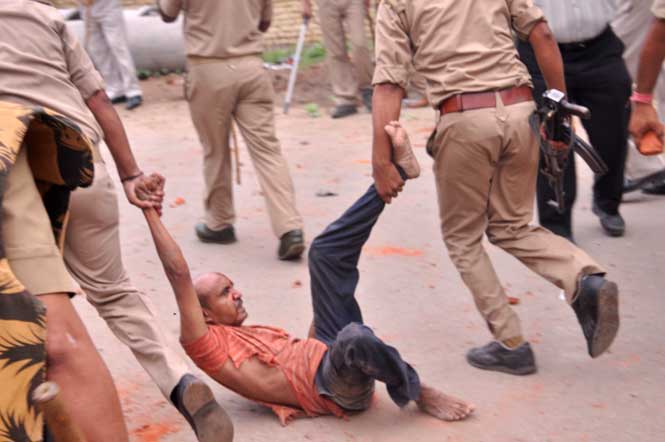 Saharanpur: Three persons were killed and 20 others were injured in violent clashes between two groups in Saharanpur, western Uttar Pradesh, on Saturday.Â The clashes broke out at 3 am over construction on a disputed piece of land. Shops were burnt, cars including some police vans, were set on fire and the office of the local fire department was gutted. Curfew has been imposed in the area and 20 people have been arrested in connection with the incident.

The disagreement over the land in question had started over four years back. The Sikhs living in the area wanted to extend the area of their gurudwara. But Muslims, living just 200 metres away from the spot, claimed a mosque was situated here 10 years ago.Â The case reached the local sessions court which recently ruled in favour of the Sikhs. The members of the Muslim community filed an appeal at the Allahabad High Court against the verdict, but that was later withdrawn.

On Friday evening, the Sikhs started construction on the land. That set off the trigger, with mounting tension in the area finally leading to the early morning clash.

“We have been living here for years, we never saw any mosque. And despite court ruling in our favour, we were told by the administration to delay the construction after elections, so we started construction last evening. This morning, we saw a mob of thousands just landing up out of nowhere. They fired at us and even pelted stones,” said Maninder Bagga, who lives near the Gurudwara.

But the Muslims claim that some of them had just gone over to talk to the Sikh groups when they were allegedly attacked. They also allege that window panes of their mosques were shattered, and cars set on fire, and that local police was also involved in it.

Police officials, meanwhile, said this looks like a well-planned attack, with fire department office being attacked so that the officials there are not able to help the locals.

The district administration said that no permission was taken for construction, hence it was illegal.

Chief Minister Akhilesh Yadav has deployed paramilitary forces and rushed senior officials from Lucknow. Home Minister Rajnath Singh spoke to him earlier in the day and assured that 600 paramilitary personnel will reach Saharanpur by Sunday for assistance.