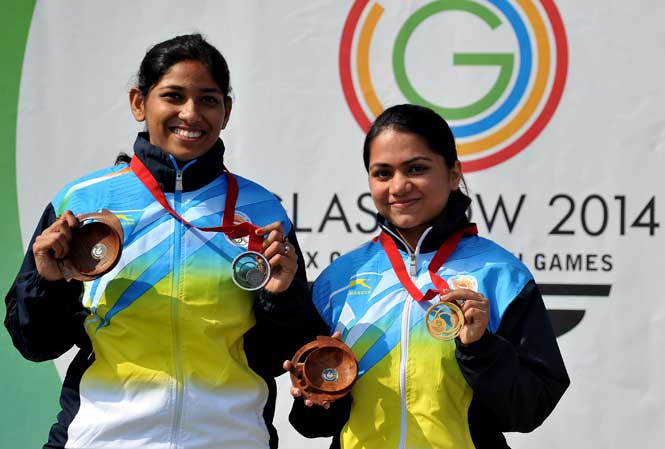 With judokaÂ Rajwinder KaurÂ andÂ Omkar OtariÂ bringing a bronze each , India’sÂ medals tallyÂ swelled to 17 – five gold, seven silver and four bronze – but the country dropped one place to fifth in the leaderboard, as Canada (7-2-6) snatched the fourth slot by virtue of winning more yellow pieces.

England (16-12-12), Australia (113-13-17) and hosts Scotland (9-6-7) occupy the first three places, and even though these are still early days, India’s hopes of retaining the second spot they earned back home in Delhi in the previous edition of the Games could prove to be a big ask.

A day after ace marksman Abhinav Bindra bade adieu to the Commonwealth Games with a gold, the guns boomed loud for India, as their participants won five medals at the Barry Buddon Shooting Range.

World No.17 Apurvi, who topped the qualifications with 415.6 points (a Commonwealth Games record), led in the finals right from the start and shot 206.7 points to give India their second gold medal from shooting.

In the final, Rahi, who hails from Kolhapur, proved too good for Anisa by shooting a total of eight points to her 33-year-old opponent’s mere two. The duo had raised hopes of a double triumph in the semi finals itself, where 23-year-old Rahi topped with 16 points while Anisa finished second with 14 to enter the summit clash.

Earlier, Prakash Nanjappa won the silver in the men’s 10m air pistol event. For Nanjappa it was a great comeback story after having been detected with Bell’s palsy, a form of facial paralysis, last year.

Australia’s Daniel Repacholi won the gold with 199.5 points from Nanjappa, at 198.2, while England’s Michael Gault took the bronze with 176.5.

The 38-year-old Nanjappa was leading till the fourth round with a combined score of 100.9 but a poor fifth round – 17.7 – saw Repacholi go ahead of the Banglorean. Though he had a better sixth round than Repacholi, the Melbourne-born maintained his lead to clinch the gold.

Nanjappa, who gave up the sport between 2003-09 until his father encouraged him to take it up again, had earlier advanced to the final after topping qualification while compatriot Om Prakash narrowly missed out, finishing ninth.

But there was some disappointment from the shotgun events as Mairaj Ahmad Khan was knocked out of the men’s skeet qualification. The 38-year-old finished sixth with a total score of 117 behind Cypriot Andreas Chasikos, who topped the standings with 120. Mairaj finished with 47 points, two behind Chasikos.

Judoka Rajwinder Kaur helped India round off the day on a high as he claimed the bronze in women’s 78kg category beating Kenyan Esther Akinyi Ratugi in the third place play-off contest B at the Scottish Exhibition and Conference Centre. Rajwinder won penalties as Esther picked up three warnings.

But other judokas Jina Devi Chongtha, Sahil Pathania and Pariskhit Kumar missed the medal by a whisker as they lost their respective bronze medal play-offs.

The Indian men’s table-tennis team won their quarterfinal match beating Scotland 3-0 and will now take on England in the semi-final Sunday. Meanwhile Indian women, silver medallists four years ago at home, lost their semifinal to Singapore 1-3 and will face Australia for the team bronze Sunday.

On the hockey turf, Indian men thrashed Scotland 6-2 in their second Pool A match. The visitors led 2-0 at the breather.

After drubbing Wales 3-1 in the opener, India delivered a strong performance to drub the hosts and go top of their group with six points.

There was also good news from the boxing ring as Manoj Kumar entered the Round of 16 of the men’s 64kg category. He defeated Mokhachane Moshoeshoe of Lesotho 3-0.

India’s Deborah, Mahitha Mohan and Kezia Vargheese were knocked out of the women’s sprint qualifiers in the cycling track event at the Sir Chris Hoy Velodrome. The other cyclist Sunita Yanglem failed to finish in the 10 km women’s scratch race final

India also crashed out of the women’s fours lawn bowls after the team finished fourth in section B losing their last group match to Northern Ireland at the Kelvingrove Lawn Bowls centre.