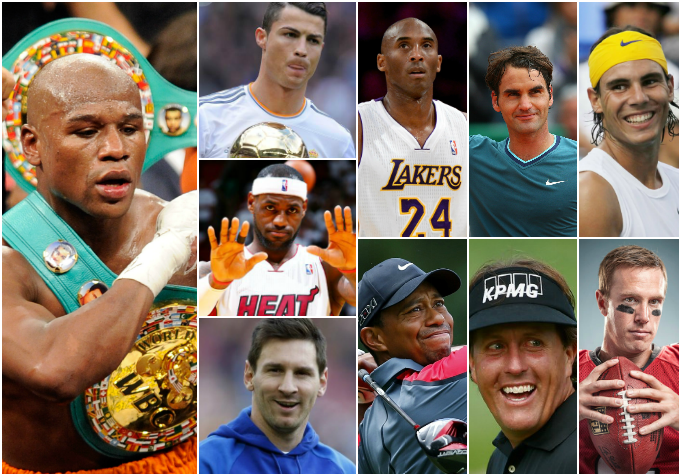 New Delhi: They are the masters of their sport and they are the masters of the moolah. Apart from the perks of being famous and having everything at their beck and call, they also mint money, and mint them like itâ€™s nobodyâ€™s business. But then, a handful of the sportspersons not just get their act right in their game plans, they also do it right in the commercial space.

In a list issued by American business magazine Forbes, it has revealed the highest-paid athletes in the world. Here is the list of the top 10 highest paid sportsperson:

Boxer Floyd Mayweather, Jr., tops the list at $105 million, despite not making any money on endorsements, according to Forbes. Mayweather has been cashing multi-million checks for his fights for more than a decade. He banked at least $25 million for each of his past nine bouts going back to 2007 when he defeated Oscar De La Hoya in the most watched fight in the history of boxing pay-per-view events. Mayweather has earned almost $400 million in the ring since he turned pro in 1996 after the Olympics, but he has never had a year like this past one.

Real Madrid and Portugal national team star Cristiano Ronaldo ranks second overall with total earnings of $80 million. Ronaldo has 11 endorsement partners like Emirates, Nike, Samsung Electronics and Toyota Motor that generate $28 million a year in income. Ronaldo has one of the biggest social media followings on the planet with 83 million Facebook fans and 26 million Twitter followers.

LeBron James ranks third with earnings of $72.3 million. James deals with Nike, McDonaldâ€™s, Coca-Cola, Upper Deck and others. James won back-to-back championships with Miami Heat and four MVP awards. Sales of his signature Nike shoes were tops among active players at $300m in the US last year and his jersey was the NBAâ€™s best-seller.

American Basketball player Kobe Bryant, ranked fifth, earns $61.5 million, half of which came from his NBA salary while the other half came from his endorsement deals. In the February issue of Forbes magazine, it has been reported that Bryant’s sponsorships are at an â€œall-time high.â€ Some of Bryantâ€™s endorsements include Turkish Airlines, IBM Lenovo, Nike, Panini, and Hublot.

Tiger Woods, who owned the top spot of Forbesâ€™ list of highest-paid athletes from 2001 to 2011 and in 2012, has dropped to sixth place with $61.2 million. The majority of Woodsâ€™ earnings came from his endorsements amounting to $55 million. Woodsâ€™’ earnings significantly dropped when Electronic Arts decided to put a halt in its relationship with him.

Swiss fourth-ranked Roger Federer earned a total of $56.2 million making him land at the seventh place. Federerâ€™s endorsement earnings sum up to $52 million. Federer endorsements include Nike, Credit Suisse, and Rolex. Forbes mentioned the Swissâ€™ contract with sports apparel giant Nike is worth $100 million for a 10-year period and to get a starting guarantee from his management, the tournament organizers are asked to shell out more than $1 million.

Golfer Phil Mickleson earning $53.2million and is places at the eighth spot. Mickelson has won in 42 events on the PGA tour, which includes five championships, three Masters title, a PGA Championship, and British Open Championship. Mickelson has endorsements with Callaway, Barclay’s, Exxon Mobil, and Rolex to name a few.

Master of Clay Court, Rafael Nadal holds the ninth position in the list of Highest Paid Athletes 2014. He has total income of 44.5 millions in 2014. Nadal, making 30 million via his commercial deals with leading companies and also getting handsome amount on salary and winning prizes.

Matt Ryan is 10th member of the list. Matt earns $43.8 million. Ryan is grossing $42 million from his salary in the NFL, and the remaining $1.8 million came from sponsors.