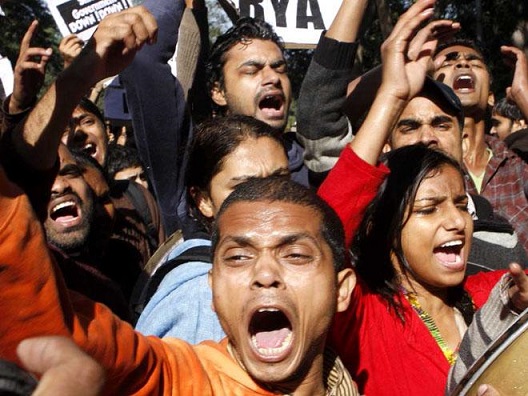 New Delhi: The standoff between Delhi University (DU) and UGC on the Four-Year Undergraduate Program (FYUP) took an extreme turn with the DU Vice Chancellor Dinesh Singh resigning from his post. Earlier, two students and a teacher were injured during demonstrations. Some teachers went on a hunger strike on Tuesday, blaming Union HRD Minister Smriti Irani and UGC for the mess. Â Dinesh Singh was instrumental in introducing the FYUP program and he faced flak for it.

“It is all a conspiracy to help the private universities. Right now, 4500 teaching posts are vacant, and the hiring processes are on,” former DU Teachers Association (DUTA) president Aditya Narayan Mishra said. Â While the DU VC may have resigned the students continue to suffer as the logjam continues.

Apart the council members, there are some students favoring the Four-Year Undergraduate Programme (FYUP). On Monday, Students for Academic Excellence and Inclusive Growth (SAEIG) held a protest at Jantar Mantar against UGC for directing Delhi University to scrap FYUP. The protesters demanded UGC to retain FYUP.

Some of the students of DU under FYUP are favoring the program asking for minor changes in FYUP. “DU’s FYUP was not designed in a correct way; it had been appreciated if implemented differently. It will turn out to be a great advantage-while applying in foreign universities, we need 4-year of grad and FYUP gave me that.” Apoorva Gupta, student of SRCC. â€œDU should not scrap the FYUP, just some substantial changes are required in the course structure,â€ she added.

The reaction of students already in 4-year programme is mixed.

â€œWe are hanging in between the 4-year program and UGC. Instead of removing FYUP, they should make it better,â€ said Shivangi, a student of Hindu college

â€œEveryone is thinking about the present batch, but whatâ€™s gonna happen to us who have already enrolled in FYUP last year?â€ asked Deeksha, a student of Miranda House.

â€œDelhi University should take a decision fast, as they are wasting time,â€ said Sahil, a student ofÂ SRCC.

Following a directive from the University Grants Commission (UGC) to Delhi University regarding its four-year undergraduate programme, St. Stephen’s CollegeÂ SundayÂ said it will defer final admissions to the course till a decision is taken by the competent authority.

“In view of the reported UGC directive to Delhi University regarding its undergraduate programmes, St Stephen’s College, while continuing with the ongoing selection process, including the publication of provisional lists of selected and wait-listed candidates for various courses, shall defer final admissions till a decision is taken on the matter by the competent authority,” said the college in a press statement.

According to a majority of students, FYUP is not at all beneficial for them; itâ€™s merely the wastage of time and money. â€œFoundation courses were supposed to help us build our skills, but they have failed to do so and the extra year caused us a lot of burden,â€ says Yashdeep, a student enrolled with FYUP.

The uncertainty has affected the future of nearly 3 lakh students, and the admission procedures of Delhi University has been stalled till a final decision is taken on the matter.