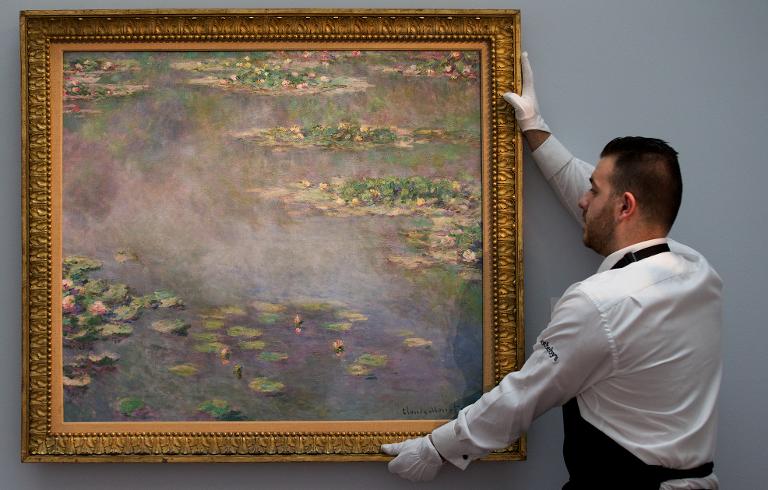 An iconic “Water Lilies” painting by French artist Claude Monet sold for Â£31.7 million ($54 million, 39.7 million euros) at a London sale on Monday, the second-highest sum paid for his work on record.

The 1906 painting “Nympheas” — sold to an anonymous bidder — formed part of a seminal exhibition held at the Galerie Durand-Ruel, in Paris, in 1909 to unveil Monet’s Water Lily works.

The instantly recognisable Impressionist masterpiece once belonged to the French art dealer Paul Durand-Ruel and remained in his personal collection throughout his life.

It has since been displayed in the world’s top galleries, including the Museum of Modern Art in New York and the Musee National d’Art Moderne in Paris.

“Le Bassin aux Nympheas” (“Pool of Water Lilies”), from the same series, still holds the record for a Monet painting sold at auction, fetching $80.3 million at Christie’s in London in 2008.

The series of around 250 oil paintings, which became Monet’s main focus during his last 30 years, is considered to have had a huge impact on the evolution of modern art and to be the French artist’s greatest achievement.

Also sold at Sotheby’s Impressionist & Modern Art sale was “Composition with Red, Blue and Grey” by Dutch artist Piet Mondrian, which also achieved the second-highest price ever paid for one of his works at auction.

The 1927 piece, which went under the hammer to an anonymous bidder for Â£15.2 million, features a distinctive prime colour combination and is unusual for its large size.

It once belonged to renowned dealer and collector Ernst Beyeler and has been included in some of the most important retrospective exhibitions of Mondrian’s work, including the 1971 show at the Guggenheim, New York.

Helena Newman, Sotheby’s Co-Head of Impressionist & Modern Art Worldwide, explained: “At the core of the sale this evening was a significant group of works from private and estate collections which were met with great enthusiasm and drove global bidding throughout the auction, with notable participation from Asian and Russian collectors.”