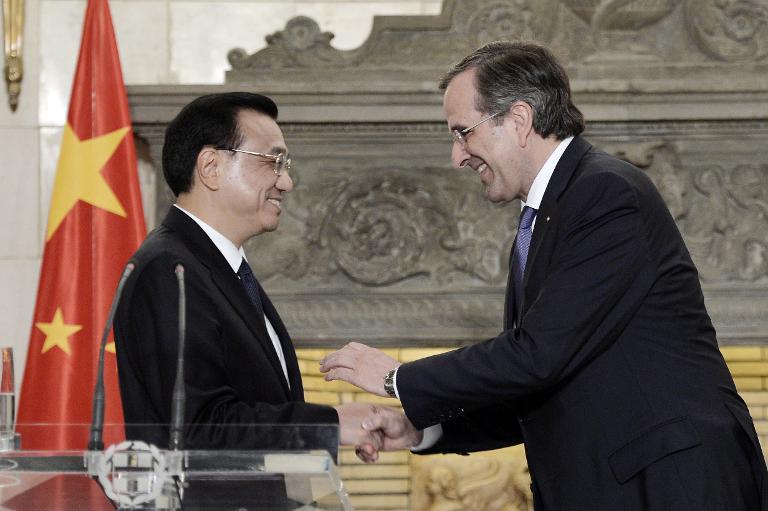 Greece and China on Thursday signed over a dozen trade and investment deals worth some $4.6 billion (3.4 billion euros) as Chinese Prime Minister Li Keqiang began a three-day official visit.

“Greece can become China’s gateway in Europe, and the start of a European trade corridor,” Greek Prime Minister Antonis Samaras said at a joint press conference with Li.

There are also agreements on the construction of solar energy parks in Greece, and trade deals involving marble, granite, wine and olive oil.

“When the Greek government issues bonds, China will continue to be a long-term, responsible investor,” Li said.

Greece in April returned to borrowing in the markets for the first time in four years with a five-year bond sale worth 3.0 billion euros. It is expected that more bond issues will follow.

With Greece now on the path to recovery, Li’s three-day official visit to Athens marks Beijing’s renewed interest in investment prospects up for grabs.

Chief among them is a 67-percent stake in the Piraeus port authority, the largest in the country.

Chinese transportation giant COSCO, which already has a major foothold after having won in 2008 a 35-year concession to expand the two main container terminals at the port, is a favourite to win the deal.

On Friday, Li is scheduled to travel to Crete, where the airport of Kasteli has been cited as a potential investment target for China.

Overall a dozen ports, including in Greece’s second-largest city Thessaloniki, are also to be privatised under a state asset programme mandated under the country’s EU-IMF debt rescue.

The last visit by a top Chinese official to Greece — then premier Wen Jiabao — was in 2010, at the start of the European country’s crippling economic crisis.

The selection of COSCO in 2008 to expand the container terminals at Piraeus made waves, but subsequent efforts by the Greek state to secure Chinese investment — including in public railways and the Athens airport — saw little success.

But with the spectre of Greece going bankrupt and a breakup of the euro receding, Chinese investors have begun to show renewed interest.

Earlier this year a group including Chinese conglomerate Fosun was selected to lead a 6-billion-euro ($8.1 billion) redevelopment of the old Athens airport of Hellinikon into a housing and leisure complex.