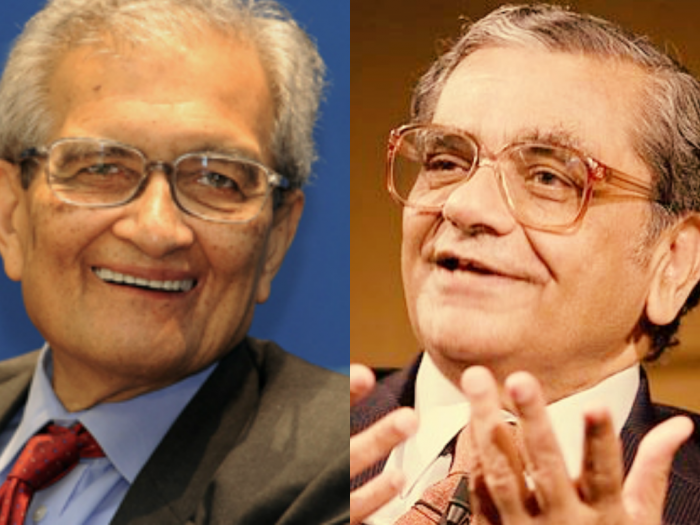 Two of the most famous Indian economists, Sen and Bhagwati disagree on the steps India needs to take to turn the economy vibrant. While Sen advocates an increase in social spending to fast-track growth, Bhagwati argues growth first and then social development. As with all economic debates, both have a relevance, up to a point.

Both economists agree that Indiaâ€™s economic policyâ€™s primary objective must be poverty alleviation. From this point on, the differences begin. The two economists cite different examples of success stories among Indian states. Bhagwati is a fan of the oft-mentioned Gujarat model while Sen admires economic policies in Kerala. The argument goes that Kerala owes its high social indicators due to the redistribution policies of the state government while Gujarat struggles in comparison when measuring indicators like female literacy and child nutrition. Bhagwati and his colleague at Columbia, Arvind Panagariya argue that much of the difference between the two states can be attributed to Keralaâ€™s head start compared to the rest of the country and when measuring for actual improvement in social indicators, Gujarat is among the best performers.

Bhagwati also claims that Keralaâ€™s performance itself is because of growth oriented-policies rather than social redistribution. While Kerala has one the lowest poverty rates but also high income inequality when measured against other states. Bhagwati uses these statistics to back up his claim that it is a high growth rate and not social spending that has helped improve living conditions of average people in the state.

A successful economic policy must not compromise growth and social development at the cost of each other. Growth and improvement of social indicators must go hand-in-hand. Focussing too much on redistribution will do more damage in the long run; Sen is however correct to argue that growth should be a means to an end. Growth however, is vital if a state is to acquire sufficient revenue to redistribute in the first place. Instead of just splitting the proverbial pie differently, it must be made larger. Focusing on handouts which the state canâ€™t afford will lead to inflation which hurts the average person the most, ironic if you consider these policies were made to benefit these people in the first place.

While this is an ideological debate tinged with a hint of personal dislike between the two economists, the new government knows their suggestions arenâ€™t mutually exclusive. An ideal economy would incorporate high and inclusive growth and it is this balancing act the new government must commit to propel India’s economy back into the limelight.