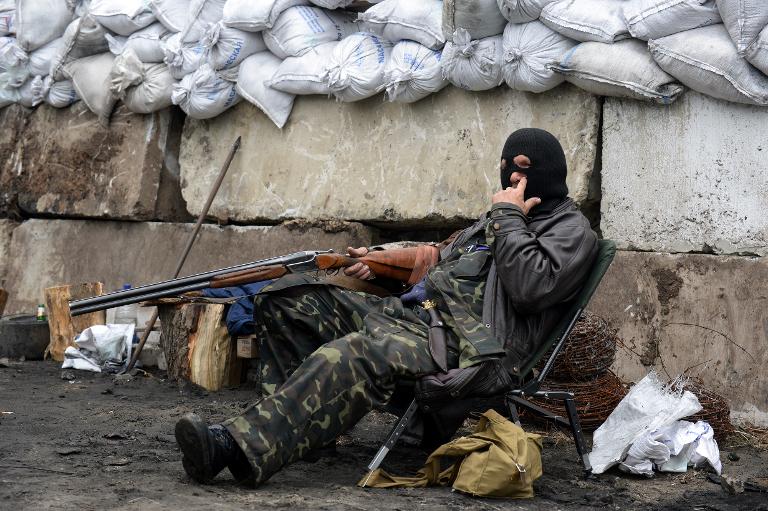 The International Monetary Fund has thrown a $17-billion lifeline to recession-wracked Ukraine, whose president has admitted that authorities are powerless to prevent pro-Russian militants over-running the east of the country.

The Washington-based IMF said that $3.2 billion would be available immediately, as the West tries to shore up the government in Kiev which has put its armed forces on “full combat alert” amid fears of a Russian invasion.

IMF chief Christine Lagarde said “urgent action was necessary” to prop up the Ukrainian economy, which the fund predicts will shrink by 5.0 percent this year, as the crisis takes its toll on industry and consumers.

The immediate deployment of aid may also help Kiev pay a bill to Russian state-owned gas firm Gazprom the company calculates at $3.5 billion.

Russia has threatened to turn off the taps to Ukraine — and by extension to several European countries — if the bill is not paid in full, amid the worst East-West showdown since the Cold War.

Talks were due to take place Friday in Warsaw between the European Union, Russia and Kiev over the gas dispute.

The package is part of a total rescue plan worth some $27 billion from Western powers for the former Soviet republic.

The deal was approved by the IMF’s 24-member board, including a representative from Russia, which the West accuses of fomenting unrest in the eastern regions of the country to destabilise its neighbour.

The lifeline came as the country’s interim president admitted the police was “helpless” after pro-Russian separatists tightened their grip on towns and cities in the east, spearheaded by armed men Kiev suspects are sent by the Kremlin.

On Wednesday, rebels stormed the town hall and police offices in the city of Gorlivka, adding to the dozen locations they control in the restive eastern regions.

Pro-Russian militants also seized the council building in the city of Alchevsk without encountering resistance.

The interior ministry said Thursday that between 30 and 50 of its law enforcement officers were being held in the flashpoint city of Slavyansk, where militants are also detaining seven European monitors from the OSCE.

Interim president Oleksandr Turchynov placed his forces on “full combat alert” in the face of what he called a “real threat” of Russia starting a war against the former Soviet republic.

He said the priority now was to stop the spread of what he called “terrorism,” seemingly admitting much of the east was already lost.

Rebels in the east have vowed to hold a “referendum” on independence on May 11, two weeks before a nationwide presidential vote that US Vice President Joe Biden has described as “maybe the most important election in Ukrainian history”.

Yulia Tymoshenko, a former prime minister who is a frontrunner for the May 25 presidential election, said Russia had already started an “undeclared war” against her country.

Russian President Vladimir Putin has denied his forces are operating in eastern Ukraine but Moscow has an estimated 40,000 troops parked on the border.

As tensions mount between Kiev and Moscow, Ukraine late Wednesday arrested the Russian defence attache and told him to leave, accusing him of spying.

Speaking in Santiago, Russia’s Foreign Minister Sergei Lavrov said Moscow did not intend to react immediately to a new series of sanctions announced on Monday by the United States, the EU and others in the group of seven top world economies.

“We want to give our fellow governments the opportunity to calm down,” Lavrov said after meeting his Chilean counterpart.

Moscow “will not rush to do anything stupid”, Lavrov added, threatening however that the Kremlin would examine retaliatory measures “if your actions continue”.

Putin has warned that tit-for-tat moves by Russia could harm Western interests in the lucrative energy sector.

The European Union said on Wednesday it was considering slapping sanctions on some of Putin’s closest allies but the 28-member bloc is divided on the issue, according to diplomats.

Lavrov also called for the release of the seven hostages from the Organisation for Security and Cooperation in Europe held in Slavyansk but insisted “we can’t make decisions for these militias.”

“You have to take into account the threats these militias face from Kiev.”

The self-styled mayor of Slavyansk, Vyacheslav Ponomaryov, told the Interfax news agency that talks had begun with the Kiev authorities to secure the freedom of the men — four Germans, a Pole, a Dane and a Czech.

“We’ve created comfortable conditions for them, we are on friendly terms. Of course, they want to go home, and we are already conducting negotiations with the Kiev authorities,” said Ponomaryov.

“We are hoping we will manage to swap them for our comrades who have been captured by Kiev.”

Three captured Ukrainian security service officers, who were paraded bruised and battered in front of the cameras in their underwear, could also be exchanged, the “mayor” said.

The unrest in Ukraine, which started with peaceful demonstrations in Kiev against former president Viktor Yanukovych, has rapidly spiralled into one of the worst geopolitical crises in years.

After a deadly crackdown on protesters, Yanukovych was forced out, sparking fury in Moscow which ended in the Kremlin’s blitz annexation of the Ukrainian peninsula of Crimea.